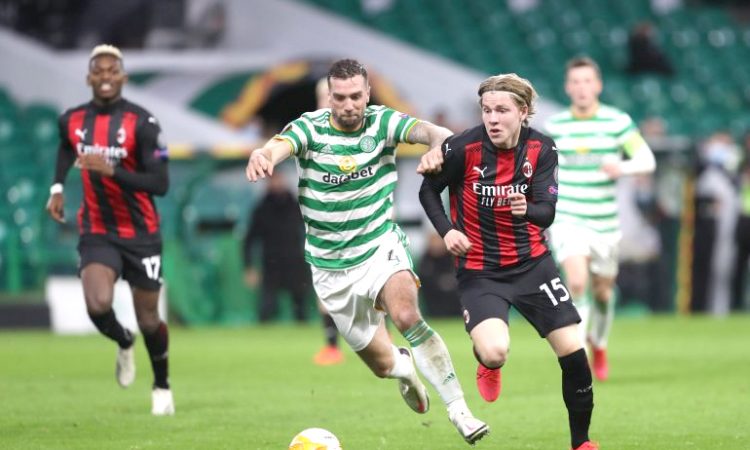 GLASGOW, October 23: AC Milan’s Rade Krunic, Brahim Diaz and Jens Petter Hauge netted in a 3-1 win at Celtic in their Europa League Group H opener on Thursday but the Italians had to withstand a late barrage from the Scottish champions to secure the three points.
Krunic opened the scoring when he outjumped defender Stephen Welsh to head home Samuel Castillejo’s cross in the 14th minute and although Celtic had some decent passages of play, it was the visitors who created the better chances.
Milan went two up when Zlatan Ibrahimovic stretched the Celtic defence with a ball down the left to Theo Hernandez, and his pass found Brahim Diaz, who fired across goalkeeper Vasilios Barkas into the corner of the net just before halftime.
Celtic sent on Mohamed Elyounoussi for Welsh at the break and began to mount dangerous attacks down the flanks through Diego Laxalt, on loan from Milan, and fellow substitute Tom Rogic.
Elyounoussi pulled a goal back for Celtic in the 76th minute with a closerange header from Ryan Christie’s corner to prompt a frenetic finish as the home side poured forward, but Hauge’s stoppage-time goal put the outcome beyond doubt for Milan.
In the other game in the section, Lille’s Turkish striker Yusuf Yazici got a hattrick as they beat 10-man Sparta Prague 4-1 to top the group ahead of Milan on goal difference. (Reuters)