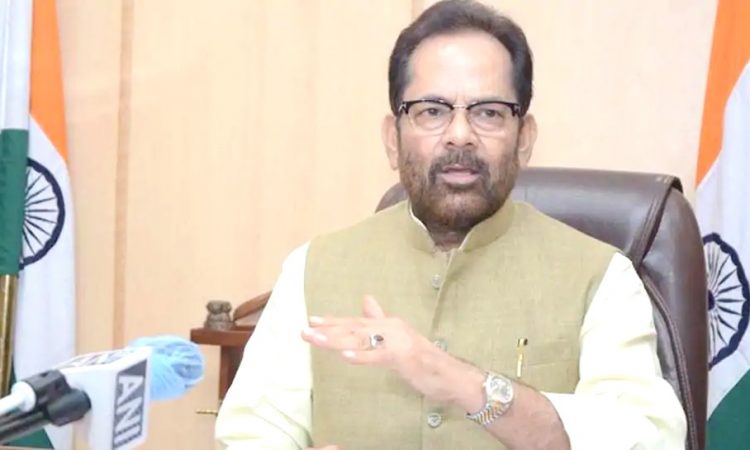 New Delhi, July 22: Union Minority Affairs Minister Mukhtar Abbas Naqvi said on Wednesday asserted that there has been about 82 per cent decline in triple talaq cases since the law against the “social evil” was put in place, terming August 1, when the legislation came into being as, “Muslim women’s rights day”. He also asserted the Muslim Women (Protection of Rights on Marriage) Act, 2019, has taken its course whenever such a matter has been reported.
In an article ‘Triple Talaq — Big Reform, Better Result’, Naqvi said, “One year has passed since the law against Triple Talaq was passed and there is a decline of about 82% in Triple Talaq cases thereafter. If any such case was reported, the law has taken action. 1st August is a day which made Muslim women free from social evil of Triple Talaq; 1st August has been recorded in the country’s history as “Muslim Women Rights Day”.”
He also wrote, “Triple Talaq or Talaq-a-Biddat was neither Islamic nor legal. Despite the fact, the social evil of Triple Talaq was given “political patronage” by “Merchants of Votes”.”
“1st August 2019 is a historic day in Indian Parliamentary history when The Bill against Triple Talaq was made a Law despite obstacle put by so-called “Champions of Secularism” including Congress, Communist Party, SP, BSP and Trinamool Congress. 1st August became the day which ensured gender equality and strengthened constitutional, fundamental and democratic rights of the Muslim women and it also gave confidence to the women, which constitute almost half of the population in India. 1st August will remain as a golden moment of Indian democracy and Parliamentary history,” he said.
The minister said that India runs on a Constitution, not on Shariat or any other religious textbook. “Earlier, various legislations had been brought in the country to abolish social evils such as Sati Pratha and Child Marriage. Triple Talaq law has nothing to do with religion, the law has been made purely to ensure gender equality by ending a social evil, inhuman, cruel and unconstitutional practice. Instant divorce by verbally saying Talaq thrice is illegal. There were several incidents coming where women had been given Talaq through a letter, phone or even through message and WhatsApp. Such incidents are unacceptable to a sensitive country and to a government committed to inclusive development,” he said.
“Several Muslim-majority nations of the world had declared Triple Talaq as illegal and un-Islamic much earlier. Egypt was the first Muslim nation which abolished this social evil in 1929. Sudan in 1929, Pakistan in 1956, Bangladesh in 1972, Iraq in 1959, Syria in 1953, Malaysia in 1969 had abolished the practice of Triple Talaq. Besides, countries such as Cyprus, Jordan, Algeria, Iran, Brunei, Morocco, Qatar, UAE also ended this social evil many years ago. But it took 70 years for India to get rid of this inhuman and cruel practice,” he added.
“The Government led by Prime Minister Shri Narendra Modi made the law against Triple Talaq to make effective the Supreme Court’s judgement. The Supreme Court, on 18th May 2017, had declared Triple Talaq as unconstitutional. By abolishing the Triple Talaq, the Modi Government has strengthened socio-economic, fundamental and constitutional rights of the Muslim women,” he further added.
“Prime Minister Shri Narendra Modi’s Government is committed to the empowerment of all sections and social reforms. Some political parties give illogic that why the Modi Government is worried about Talaq in Muslim women? Why the Government don’t do anything for their socio-economic-educational empowerment? I want to make it clear to those people who ask such questions that during the last about 6 years, the Modi Government has worked with inclusive empowerment for every section including Muslim women,” he stated. (Agencies)