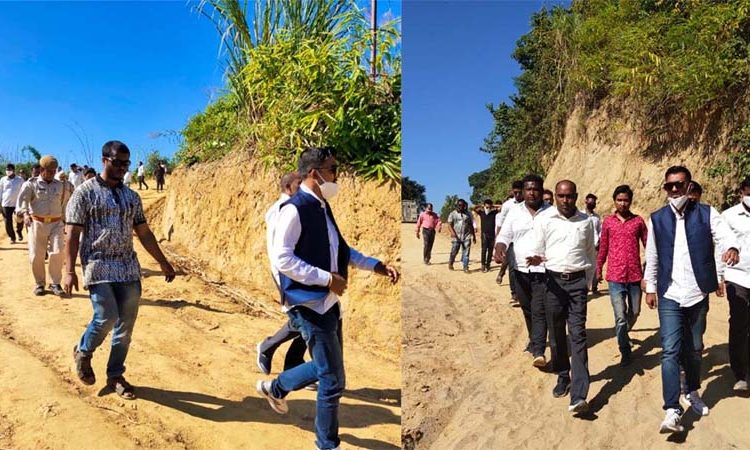 The Jorhat AASU delegation on way to the disputed area in Assam-Nagaland border at Mariani. Image credit - Northeast Now

DIMAPUR, NOVEMBER 15: The AASU on Sunday threatened to launch an economic blockade against Nagaland if the neighbouring state continues “encroachment” of Assam land.
The All Assam Students Union (AASU) said they would not concede an inch of land to Nagaland.

According to a report in Northeast Now, a team of Jorhat AASU on Sunday visited Nagajanka, the spot where the Nagaland administration had set up a police camp inside the Dissoi Valley Reserve Forest, under Mariani Range of Jorhat Forest Division, on November 10.
The step from the Nagaland administration triggered tension along the Assam-Nagaland border.
The next day, Assam Police set up a camp near the spot to stop further encroachment.
Hectic parleys followed between officials of Jorhat and Mokokchung districts with the former demanding Nagaland to dismantle the bamboo and tarpaulin structure as it was constructed on the disputed land.
A few years ago, the Supreme Court ruled that status quo be maintained in the disputed areas and no state should make any construction until the conflict is resolved.
On November 9, Assam Police personnel dismantled a temporary structure which was reportedly constructed by the Mokokchung district administration.
Just two days after the dismantling of that structure, the Nagaland administration set up another camp at a place about 200 metres away on a hillock which could house 25 people and had a separate room for rations.
The AASU unit flayed the Assam Government for its failure to protect the state’s land and criticised Chief Minister Sarbananda Sonowal, who is also in charge of the Home Department.
The AASU leaders said the Assam CM is behaving like a silent, shy bride (Nimati Koina), even after Nagaland managed to “erect two Border OutPosts (BOPs) at Nagajanka, inside Assam territory”.
The AASU team lauded the Assam Police personnel for taking up a confrontational position at the place and firmly holding ground.
The team alleged that the Assam police personnel were short of food items and drinking water.
The AASU team alleged that 82% of Dissoi Valley Reserve Forest had been encroached by Nagaland and they had also built an RCC bridge and electrified the encroached areas.
Jorhat AASU general secretary Dip Dutta said the team had gone to boost the morale of the Assam Police but if the Government fails to push back the Nagas, then they would resort to an agitation and if required, an economic blockade.
KSA calls for economic blockade from Nov 17
Meanwhile, the Karbi Students Association has also called for an economic blockade against Nagaland from November 17.
According to reports, the Bijoy Bey led Karbi Students Association (KSA) on Sunday called for an economic blockade of Nagaland from November 17.
The KSA has called for the blockade to protest against unabated illegal encroachment in the Karbi Anglong district by people from the neighbouring state.
“Some Naga miscreants with the support of the Nagaland Government have illegally encroached the land in our district,” said a member of KSA.
“The Karbi Anglong Autonomous Council (KAAC) and the state Government have failed to protect our land,” he said.

KSA leader Simeon Rongphar had also called for a 4-hour economic blockade on November 20 in case the KAAC and the Assam and Nagaland Governments fail to hold a tripartite talk on the border dispute.
The students’ organization claimed that encroachment activities by Naga miscreants have increased from October.
The encroachers frequently entered the district’s Daldali Reserve Forest to cut down trees.
Talks between the district administrations of Karbi Anglong and Dimapur district of Nagaland have not deterred them from illegally entering the state.
(Page News Service/Northeast Now)