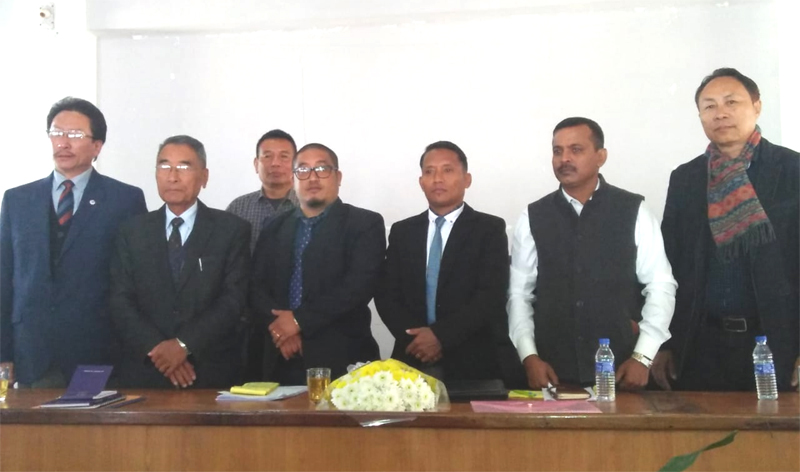 Kohima, November 19: The Naga People’s Front (NPF) on Monday urged all political parties to come together and facilitate the ongoing peace process in order to resolve the vexed Naga political problem.
Speaking during the merger ceremony of AAP with the NPF today at party Central office here, NPF President, Dr Shurhozelie Liezietsu said his party’s top most priority is to facilitate the peace process as peace is pre-requisite for speedy development of the State, adding if the Naga issue keeps on dragging the future of the Naga people would remain uncertain.
Rajya Sabha MP and Secretary General of NPF, K G Kenye said to facilitate the peace process other political parties should see eye to eye with his party. He said Cock’s party stance on Naga political issue is unchanged and that AAP merging with his party would further facilitate the peace process between the Union Government and the Naga groups.
Kenye said there was so much of hope on BJP at the Centre for an early resolution of the Naga issue but it has not materialized as expected by the people. He said there was much hope for a solution if BJP come to power but solution continues to elude the people.
The NPF president said AAP merging with his party is historic as it would further strengthen the party which is committed to play the role of facilitator to the longest political struggle in the world so that solution honourable solution could be hammered out soon. “We want honourable settlement,” he added.
He asserted that unlike other political parties, NPF will continue to represent the identity of the Naga people and that AAP leaders would not regret merging with the NPF. “Today is a historic day. AAP will not regret for merging with the NPF,” he said and appreciated the wisdom of the AAP to merger with his party.
“Nagaland can remain strong if people come together for a common goal,” Liezietsu said.
He said AAP is a strong party as it is in power in Delhi despite efforts being made by the BJP to destabilize the government. He said AAP surviving against all odds indicate it is a strong political party in the country. He attributed the survival of the AAP Government in Delhi to the strong commitment of the people to fight for a common cause.
Rajya Sabha MP rebutted the BJP secretary, Ram Madev’s assertion that people have rejected the NPF, as AAP has merged with the NPF for a common cause particularly to fight against corruption. “If we are rejected why did AAP merge with the NPF,” he asked. He said AAP merging with his party is a big morale boost to the party.
Former AAP President, Dr. S. Amos Longkumer said merging his party with the NPF is historic and expressed optimism that they would further strengthen the cock party to cater to the needs of the people. He assured to work with commitment to strengthen the party so as to fulfil dreams and aspiration of the people. He said NPF is the only regional party which has preserved and protected the identity of the Nagas.
Former AAP spokesman, Dr. Lemwang Chuhwanglim said their joining with the NPF is to fight corruption. He said with their merger there would be more voices against corruption and work for the people.
President, NPF Central Minority Wing, Bishnu Bhattacharjee played a major role for the merger of AAP. He also delivered the welcome speech today.
Several AAP leaders and senior NPF functionaries attended the merger ceremony. (Page News Service)