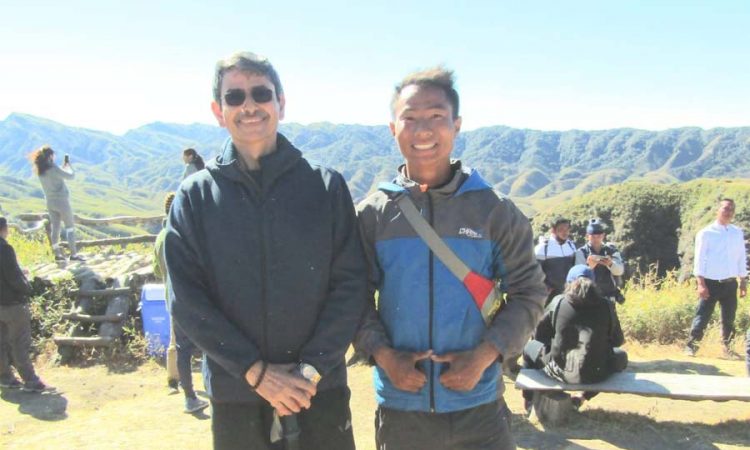 Our Correspondent
KOHIMA, JANUARY 20: Everyone has a legitimate claim on which time of the year is best to visit Dzukou Valley but Neichiikho-o Leno, a tourist guide who has been to the scenic valley for 125 times, says that it is mid-June.

“The flowering season is at its peak at this time of the year,” said the 24-year-old who hails from Mima village.
The announcement that visitors would be allowed to the valley from February 1 comes as a sigh of relief to those who have been itching to visit it as well as for the likes of Leno, whose main source of livelihood is being a tourist guide for both domestic and international tourists.
Leno–who usually goes by the name he was christened with, ‘Nicholas’–shared that the travel bans and the lockdowns that were necessitated due to the COVID-19 pandemic translated into a time of hardships for him for more than a year.
“In order to earn some money during the lockdown, I forayed into charcoal business, beekeeping, farming and the list goes on; but being a tourist guide is what I love to do, so I will resume as soon as the places open up,” Nicholas shared with an air of optimism.
According to him, he was in standard VIII when he first went to the valley. “And the only voice I heard in my head when I reached the valley was ‘everyone must see this place once in their lifetime’,” he added.
Since starting to work as a tourist guide in 2016, Nicholas has been to Dzukou Valley 125 times. His last trip was on December 30, 2020, where he was the main guide for Nagaland Governor RN Ravi and his family.
“Governor RN Ravi was so fit; it appeared to me that he was willing to take up any challenge,” he shared.
He was also the guide for Indian Actor Vidyut Jamwal and famous Indian YouTuber Tanya Khanijow in 2019.
Asked about the reaction of people when they learn that he has been to the valley 125 times, Nicholas said: “It is understandable when people ask why I do what I do after being to the valley for the 125th time, and I have to state that while taking people around the valley is my job, every single trip to the valley has blessed me with unique experience and I am not planning to stop any time soon.”
Nicholas also shared to Nagaland Page that interacting with 125 groups and individuals has led him into a journey of self-improvement. “After having met so many people from all over the word, I can comfortably say that my communication skill has improved and my Hindi has improved to a level where I can converse with anyone comfortably,” he added.
Out of the many people he has been involved with over the years, Nicholas shared that he still fondly remembers a gang of eight from Hyderabad who were in the age group of 75-65 years. “This particular group proved to me that physical hindrances that follow aged people are just a number. It is just in the mind as they effortlessly trekked all the way to Dzukou Valley and back,” he said.
Queried about his take on the cleanliness of the valley, Nicholas noted that the Dzukou Valley has witnessed a rise in the quantity of waste with the increase of visitors in recent times.

He opined that while the caretakers of the valley are doing their best to curb the problem of garbage in the valley, the best way is to check and sensitize the visitors at the entry points.
While expressing dismay over the recent Dzukou wildfire incident, Nicholas was willing to ‘bet his happiness’ on the belief that the valley will always find a way to recover no matter the level of destruction it has been subjected to.