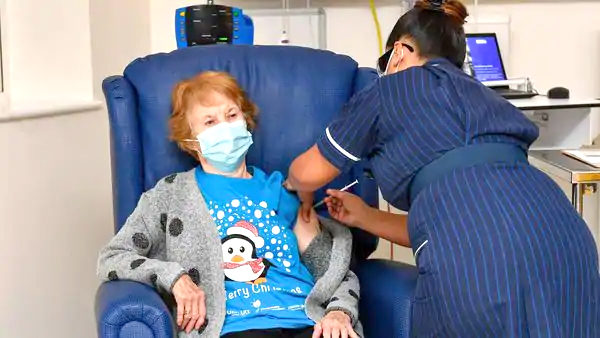 Margaret Keenan, 90, becomes the first patient in the UK to receive the Covid-19 vaccine at University Hospital in Coventry. (Bloomberg)

What’s next for Pfizer?

NEW DELHI, DECEMBER 8: American pharmaceutical giant Pfizer in collaboration with German biotechnology company BioNTech carried out the world’s first COVID-19 vaccination on a 90-year-old British individual, Margaret Keena, on Tuesday.
The vaccine, called BNT162b2, is based on messenger RNA (mRNA) technology, which makes use of a chemical messenger to instruct cells into making proteins that mimic the outer surface of the novel Coronavirus, thereby rendering immunity against it. Messenger RNA banks on synthetic genes that can be generated and manufactured rapidly in weeks, and produced at scales much faster than conventional vaccines.
After the UK rolled out plans for emergency use of the Pfizer vaccine, the pharma giant applied for similar approvals elsewhere in the world. Mentioned below are the main details on the vaccine’s progress and current status in various nations.