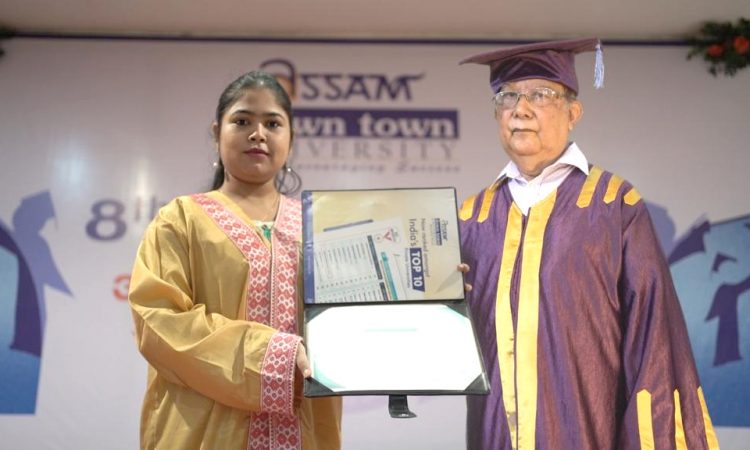 This year a total of 944 students and research scholars have been awarded degrees, out of which 724 are Graduates, 213 Post Graduates, and 7 PhD achievers. AdtU conferred honorary Doctor of Letters (D.Litt.) to Prafulla Kumar Mahanta, former Chief Minister of Assam and notable Social Activist and to Padma Hazarika, an eminent social activist and entrepreneur of Assam.
The event commenced with the academic procession of the esteemed dignitaries of Assam down town University with the University anthem playing in the background. The programme started with the felicitation of the Governor of Assam, Jagdish Mukhi as the Chief Guest of the Ceremony by the Registrar of the University, Ashim Barman.
The Governor declared the Convocation open, followed by a welcome address by the Chancellor of Assam down town University, Dr. NN Dutta. Thereafter, the Vice Chancellor (Dr.) NC Talukdar also presented his address.
Dean of Studies, Prof. Bandana Dutta, presented the PhD degrees to the seven research scholars. The Deans of the various Faculty of Study presented the names of the candidates under their respective undergraduate and postgraduate programmes who have qualified for the conferment of Bachelors and Masters Degrees.
The Governor awarded the students their respective degrees. The students who had qualified for the award of the Doctorate of Philosophy, Masters’ Degree and Bachelors’ degree in different Faculties of Studies and disciplines but were unable to attend the Convocation were presented by the Controller of Examination, Dr. Joydeep Goswami and their degrees were awarded in absentia.

Jyotismita Sarma (BSc. Microbiology) and Jutima Baruah (Msc. Microbiology) bagged the Gold Medal for the Best Graduate and the Best Post Graduate of the session 2021 respectively.
An award of appreciation for the Best Placement Achiever of the year was presented to Debapriya Paul (MBA).
After the awards, the Chancellor invited the Chief Guest to deliver his address followed by the tradition of signing the Convocation Book.
It went on to state that despite the lockdowns and prolonged halt to physical classes, teaching learning has been a continuous progression in AdtU.
“The outbreak of COVID-19 has taught us that change is inevitable. Determined to cope with the change, Assam downtown University rose to the front by adopting various digital platforms to cater to the needs of its students residing in the various parts of India as well as other countries alike. The university switched over to digital platforms by strengthening the already existing technological infrastructure called PRAN, the academic ERP that has been introduced in 2017 and ever since functioning as the main network of all academic activities.
“Online classes replaced offline classes. Not only the university provided interrupted classes to the students, it also successfully conducted the intermediate and final year/end semester examinations and declared results much within the academic calendar it formulated at the beginning of the session,” it stated.
(Page News Service)