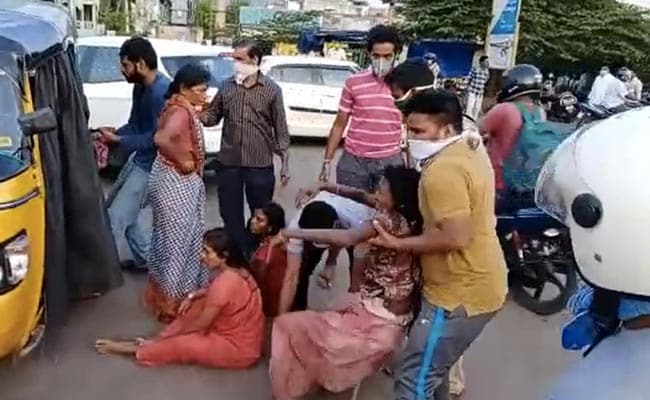 Visakhapatnam, May 7: At least 8 people died and more than thousand people fell sick after inhaling poisonous gas leaked from a chemical factory in Andhra Pradesh’s Visakhapatnam district in the early hours of Thursday. Andhra Pradesh Director-General of Police Gautam Sawang confirmed the toll at six. Unconfirmed reports say eight people have been killed in the mishap.
The incident happened at around 3 am at LG Polymers Ltd at Gopalapatnam, when people in the nearby colonies were fast asleep.
Many people, who rushed on to the streets unable to bear the pungent smell of the gas, collapsed on the roads. A large number of people, mostly children and old people, are learnt to have fainted within their homes, assistant commissioner of police Swaroopa Rani said.
“The police are unable to enter the colonies because of the foul smell. They went around the colonies asking the people to come out of their homes and move to safer places,” she said.
An ambulance driver who was rushed to move the sick to the hospitals was also suffocated and nauseous.
With the help of the police, hundreds of people had managed to move to safer places within hours. Those who fell sick were rushed to King George Hospital and some other private hospitals.
A National Disaster Response Force (NDRF) team was also pressed into service to evacuate people from the nearby colonies. Fire tenders from Hindustan Petroleum Corporation Ltd were trying to reduce the impact of the gas using water.
The gas has spread to 20 nearby villages, causing suffocation to the people. Local legislator P Gana Babu said ambulances meant for coronavirus cases were diverted to move the people from around the place to safer places.
District collector Vinay Chand told reporters that about 200 people fell ill due to suffocation. Locals said many people remained in their houses and were not responding to calls. Officials advised people not to move towards Gopalapatnam till noon.
The LG polymers company was making arrangements for reopening the plant from Thursday (May 7), after more than 40 days of closure.
Andhra Pradesh’s minister for tourism M Srinivasa Rao and deputy superintendent of police Udaya Bhaskar visited the affected colonies. (Courtesy: HT)