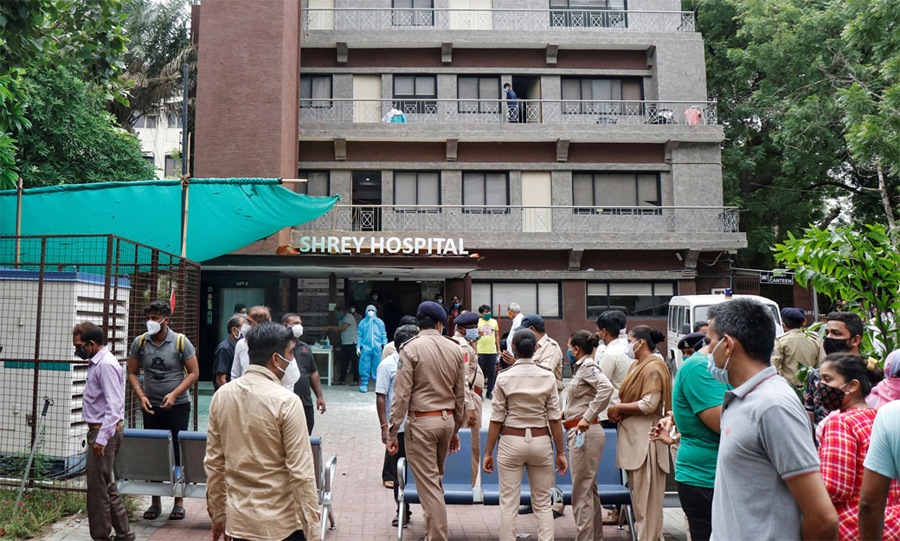 Ahmedabad, August 6: Eight coronavirus patients died in a fire inside the ICU ward of a private hospital in Ahmedabad city in the early hours of Thursday, officials said.
A para-medical staff member of the hospital was injured in the tragedy.
A cumulative compensation of Rs 6 lakh each for the families of the deceased — five men and three women — was announced by the Centre and Gujarat government.
The blaze broke out around 3.30 am on the top floor of the four-storey Shrey Hospital in Navrangpura area, officials said.
It is one of the 60-odd `designated’ private hospitals which have been authorized by the Ahmedabad Municipal Corporation (AMC) to treat coronavirus patients.
“Eight coronavirus patients admitted in the ICU ward on the fourth floor of Shrey Hospital have died due to fire.
41 other COVID patients who were in the general ward on bottom floors were rescued and shifted to SVP Hospital,” said Rajiv Kumar Gupta, an IAS officer.
Shrey Hospital was sealed for investigation, said Gupta, who has been deputed in Ahmedabad as an officer on special duty.
Preliminary investigation showed that the fire was caused by a short circuit, he said.
Gupta, Municipal Commissioner Mukesh Kumar and Principal Secretary (Health) Jayanti Ravi visited the spot.
“We have learned that an electric short circuit led to a blast. The blaze spread in the ward within minutes,” said Kumar.
According to Chirag Patel, a hospital attendant who saved the lives of three elderly patients, there were eleven patients on the fourth floor when the fire broke out.
The deceased were identified as Lilavati Shah (72), Jyoti Sindhi (55), Ayesha Tirmizi (51), Navneet Shah (80), Arif Mansoori (42), Narendra Shah (62), Arvind Bhavsar (78) and Manu Rami (82).
Additional Commissioner of Police R V Asari told reporters that Bharat Mahant, a trustee of the hospital, was being questioned.
Chief Minister Vijay Rupani ordered an inquiry by Additional Chief Secretary (Home) Sangeeta Singh and her counterpart in the Urban Development Department Mukesh Puri.
The two IAS officers have been asked to submit the inquiry report in three days, the Chief Minister’s Office said in a statement.
Deputy Chief Minister Nitin Patel said that another attendant received 25 to 30 percent burn injuries while trying to save the patients. The attendant and 41 patients were shifted to SVP Hospital, he added.
Prime Minister Narendra Modi expressed grief over the incident and announced ex-gratia compensation of Rs 2 lakh for the kin of the deceased and Rs 50,000 for the injured.
“Saddened by the tragic hospital fire in Ahmedabad.
Condolences to the bereaved families. May the injured recover soon.
“Spoke to CM @vijayrupanibjp Ji and Mayor @ibijalpatel Ji regarding the situation. Administration is providing all possible assistance to the affected,” the PM tweeted.
Chief Minister Rupani also announced a compensation of Rs 4 lakh for the kin of the deceased and Rs 50,000 for the injured (PTI)