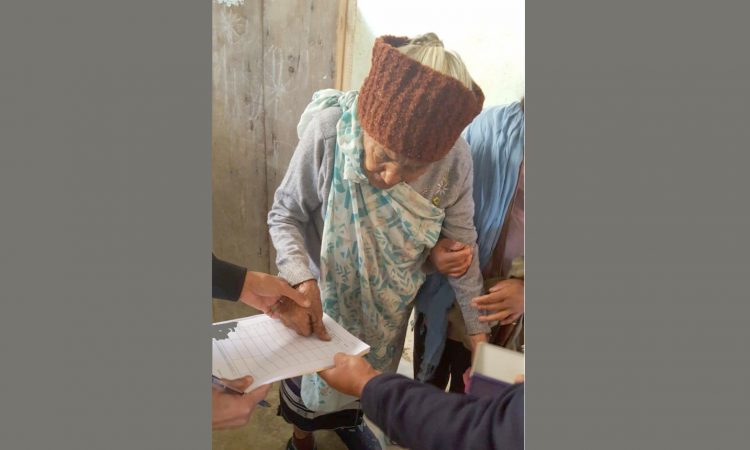 Kohima, April 11: Approximately 78.67% electorates exercised their franchise for the lone Lok Sabha seat in Nagaland and 84.3% for 26-Aonglenden Assembly bye-poll under Mokokchung district, top election official said Thursday.
The current figure for LS poll shows a decline by 9.15% as the 2014 polls had a turnout of 87.82% while even the 2018 bye-poll for the parliamentary seat had recorded 85.16% votes casted.
The figures are provisional while the final turn out will be known only after the scrutiny of all the documents of the presiding officials, which will be done from 11 am on Friday at the Returning Officer’s office in Kohima, said Chief Electoral Officer (CEO) Nagaland, Abhijit Sinha, IAS during a press conference here.
The polling concluded without any incident of violence, except for complaints for malfunctioning of EVMs in around 35 polling stations which was later rectified and voting concluded peacefully, he said.
Nagaland has a total of 12,13,777 electorates, comprising of 5,98,503 women and 6,15,274 men voters, including 7415 service voters.
Pughoboto election district recorded the highest turnout with 93.93% while Peren is lowest at 64.43%.
District wise votes polled are as follows: Dimapur – 74.59%, Peren – 64.43%, Kohima – 64.43%, Pughoboto – 93.93%, Phek – 82.48%, Mokokchng – 83.16%, Zunheboto – 81.76%, Wokha – 85.95%, Mon – 88.43%, Longleng – 84.70%, Tuensang – 73.90% and Kiphire – 85.37%.
Four candidates – INC’s KL Chishi, PDA consensus candidate and NDPP’s Tokheho Yepthomi, NPP’s Hayithung Tungoe and Independent Dr M M Thromwa Konyak fought for the lone Lok Sabha seat in the State.
Sinha said that his office has taken up the issue of Deputy Chief Minister Y Patton wearing a BJP stole while casting vote at his native village at Riphyim Old-III polling station in his home constituency at 37-Tyui in Wokha district.
He also said that the Congress party has demanded re-poll in the polling station as a video circulating in the social media has shown the Deputy CM getting inside the polling station and verifying several voters slip and casting votes.
He said appropriate action against the Deputy CM will be finalized only after Friday’s scrutiny.
On a social media circulation of supplying a false EVM to Lumami under Zunheboto district, which displayed only one signal despite votes other button being pressed, the CEO said it was found to be rumours following physical verification by the District Election Officer in presence of presiding officer, polling officials and agents of candidates.
For the parliamentary polls, Chief Minister Neiphiu Rio casted his vote at Touphema under his home constituency in Northern Angami-II A/C.
Opposition Leader T R Zeliang did it in Jalukie town of Peren district while NPF president and former Chief Minister Dr Shurhozelie Liezietsu cast his vote at L Khel in Kohima village.
NDPP nominee Tokheho Yepthomi exercised his franchise at Naharbari GPS polling station under Dimapur-III A/C. Nonetheless, the Communication Department of Nagaland Pradesh Congress Committee failed to confirm where the INC candidate Chishi exercised his franchise despite rumours of his failure to go to his own constituency on the D-Day.
NPCC president K Therie voted at Pfutsero Town in Phek district.
The by-poll to 26-Aonglenden Assembly segment is a straight contest between the Congress nominee Alemjongshi Longkumer and Sharingain Longkumer of ruling NDPP.
Aonglenden A/C has a total of 12,436 electorates including 6146 male and 6290 female voters and it recorded an approximate 84.3% turnout.
The by-poll was necessitated following the demise of sitting ruling MLA Imtikumzuk in September last year.
Asked about single member of a family casting vote for the entire family, which has been reported from several quarters, the CEO said there are no documentary evidences of such practices and there are also no complaints of proxy voting and booth capturing either.
Commissioner Nagaland and Returning Officer for the polls, M Patton supplementing the CEO said that “this election has been an exceptional one as there have been no reports of violence from any quarter”.
Further, on being highlighted about a fellow media friend’s not being able to cast vote because his vote was already casted, the CEO said “any voter whose vote is already casted can apply for tender vote”. He clarified that if the tender vote crosses certain limit re-poll is recommended for the particular polling station.
Low turnout
Meanwhile, asked about the low turnout of electorates, a concerned voter Kelhou said voter turnout is comparatively less for the parliamentary polls than the State general elections.
“Nagaland has only one seat in the Parliament and it would be a reason for the less turn out in the first few hours,” said Mhalie another electorate while standing in queue.
A journo working in Kohima (name withheld), who did not go to exercise her franchise to a village in Phek district confirmed “in our village the head or any member of the family is allowed to cast the vote for the entire family, and therefore I did not have to reach to do polling station to do the same”.
No polling agents
Not to mention of the low attendance of electorates for the LS polls, but another notable happening is the absence of polling agents of candidates in polling stations. The NDPP and Congress polling agents were present in almost all the 2227 polling stations spread over 12 election district but maximum of the polling stations in all districts did not have polling agents of NPP and Independent candidates, which though not mandatory is a necessity.
(Page News Service)