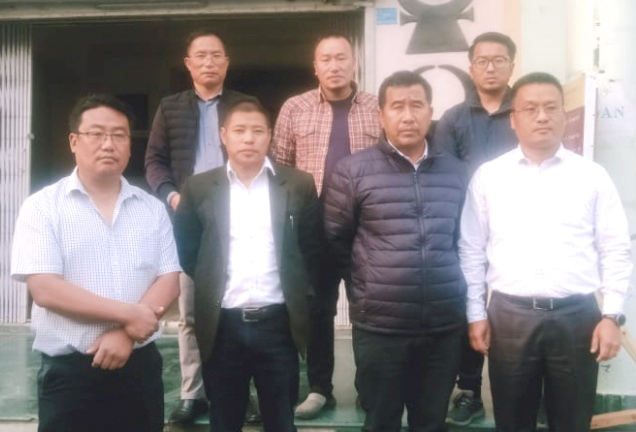 NWA officials pose for lens after the media briefing on April 5, 2021.

Kohima, April 5: Till the penultimate day of registration for the 13th Open Naga Wrestling Championship, a total of 77 wrestlers have submitted their names.
The Nagaland Wrestling Association (NWA) is organising the biennial event at Kohima local ground (Khouchiezie) on April 9, with Chakhesang Wrestling Association (CWA) as the host unit.

It will be held for the first time in two weight categories, for which 57 wrestlers have registered for 80 kg and below category while 20 are for above 80 kg category.
The quarter-finalists in both the events will vie for the “ultimate champion” title.
Informing this during a media briefing in Kohima, NWA president Dr Hiabe Zeliang and general secretary Vilekho Bio said that the last date of registration, which was earlier fixed for March 31 has been extended and will end on April 6 for the three wrestling Naga tribes – Angami, Chakhesang and Zeliang; while other interested “non-wrestling communities” within and outside the State can submit their entries till April 8.
He said that the category system is being introduced in the open championship in order to promote the Naga style wrestling among non-wrestling tribes of the State as well as beyond Nagaland.
Ao and Lotha wrestlers
Meanwhile, with three more days left for the non-wrestling tribes to enter the championship, two wrestlers – one each from Ao and Lotha community – have registered themselves to vie for the coveted title.
They are Yimkum Sashi from Nokpu village in Mokokchung district and Thechamo N Murry of Wokha village in Wokha district.
Prominent wrestlers for this event include: reigning NWA champion Venuzho Dawhuo, reigning 12th Open NWA champion Menuosetuo Yiese, former NWA champion Vechita Khesoh, former open champion Dzieselatuo Keretsu, former ZWA champions Nlumrai Hegwang, Kezhavizo Thevo, Vekuzo Vezhü and Kekhriezo Nagi.
A total of Rs 6.90 lakh has been earmarked for the different categories — weight category: champion-Rs 50,000; runner-up-Rs 30,000; 3rd place-Rs 20,000 and 4th place-Rs 15,000; ultimate championship: champion Rs 1.70 lakh, runners-up-Rs 1.20 lakh; 3rd place-Rs 1 lakh and 4th place-Rs 70,000.
Informing that while all SOPs related to COVID-19 would be enforced during the championship, with screening of spectators at the main entrances of the local ground, NWA general secretary Bio said that the team of District Task Force on COVID-19 and Chief Medical Officer Kohima would be engaged for enforcement of COVID-19 SOPs.
Meanwhile, Zeliang said that NWA is introducing the pay-and-watch or pay-per-view online system with the assistance of Nagaland Olympic Association. Wrestling fans can register online through the portal bookmyshow.com. It can also be downloaded on mobile phones – both iOS and Android, he said.
The rate of entry tickets for the spectators is: Rs 150 for gallery, Rs 500 and Rs 300 for chair and Rs 2000 for donors.
All the wrestlers have been asked to take their weight measurement at the wrestling venue between 12 noon to 3 pm on April 8 and complete their particulars on the same day itself.
Further, all the officials for the championship have also been requested to attend the briefing session at 2 pm on April 8.
Traffic appeal
Maintaining that wrestling is not only a sporting event but a festival with people thronging the venue for fanfare, the NWA requested fans residing within the reachable area of Kohima town not to use their vehicles in order to avoid traffic congestion.
The NWA also appealed to all spectators coming from faraway places and other districts to park their vehicles carefully and in a disciplined manner in order not to block the roads.
Further, the ground management team Chakhesang Christian Revival Youth Association has informed that ethnic food including Moudi, as well as fast-food will be made available while there will also be lucky draw. It also informed that a giant LCD screen will be made available for convenience of spectators.

Minister for Planning & Coordination, Land Revenue and Parliamentary Affairs Neiba Kronu will grace the event as special guess while Advisor for Youth Resources and Sports Zale Neikha will be the inaugural guest. (Page News Service)