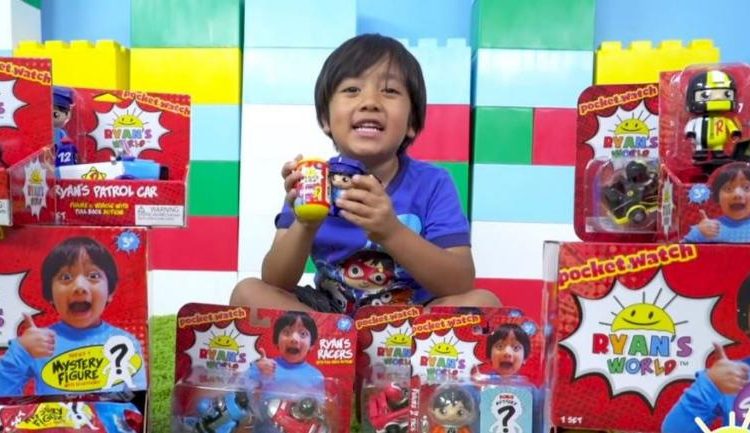 With impressive earnings of $22 million, a seven-year-old American boy has become this year’s highest-paid YouTube star, beating out established adults in the business like Daniel Middleton and Jake Paul, according to Forbes.
Forbes’ list of “Highest-Paid YouTube Stars 2018” is topped by Ryan of Ryan Toysreview, who makes his millions by reviewing everything from toys, cars, Legos through simple home-made videos that are then uploaded on his YouTube channel by his parents.
The prestigious US business magazine said these short videos have made Ryan one of the most popular influencers online, with 17.3 million followers and a total of nearly 26 billion views since he and his parents launched his main channel, Ryan ToysReview, in March 2015.
“For Ryan, this means not only an endless stream of toys to play with but also a seemingly endless stream of money: He was this year’s highest-paid YouTube star, earning $22 million in the 12 months leading up to June 1, 2018,” Forbes said.
“I am entertaining and I am funny,” Ryan recently said in an NBC interview, explaining the popularity that has led him to become a mini-millionaire.
The Forbes list includes American actor Jake Paul who comes in at the 2nd spot with earnings of $21.5 million, British gamer who specializes in Minecraft, DanTDM ranked 4th with earnings of $18.5 million, Hawaii-native Markiplier ranked 6th with $17.5 million earnings and Swedish gamer PewDiePie with $15.5 million earnings, who is ranked 9th.
“Brand partnerships, a clothing line, millions of fans: What was once solely the province of superstar athletes and Hollywood A-listers now includes ‘Markiplier’, one of the world’s highest-earning YouTubers, who hauled in $17.5 million over our 12-month scoring period,” Forbes said.
On Ryan, Forbes said he is part of the YouTube trend of unboxing, in which content creators film themselves opening up toys, tech products and other consumer goods, explaining different features and, in Ryan’s case, “screaming and giggling with enthusiastic delight as he does so.”
Nearly all of Ryan’s money, or about $21 million, comes from pre-roll advertising on his channels ‘Ryan ToysReview’ and ‘Ryan’s Family Review’. The remaining $1 million comes from sponsored posts.
“When views go up, so do these automated ad dollars. With more views than anyone else on the list, it’s no surprise he claims the top spot,” Forbes said.
Ryan has signed with kid’s entertainment studio Pocket.watch last year and in October, it was announced that content from his channel will be repackaged and distributed on Hulu and Amazon.
In August, he launched ‘Ryan’s World’, a toy and apparel collection sold exclusively at retailer Walmart. The line, which Ryan heavily promotes on his YouTube channel, features a variety of slimes and putties, Ryan action figures, T-shirts and toy cars.
“It’s so cool”, Ryan, who serves as creative director, said of seeing his face in the aisles of Walmart.
Forbes said because he is a minor, 15 percent of Ryan’s earnings are funneled into a “Coogan account” which is protected until he becomes a legal adult. A good portion of the rest likely goes to paying managerial and production fees—as well for all of those toys.
“So what happens if Ryan, tomorrow, decides he no longer wants to broadcast his toy adventures for the world? Well, his managers and agents may not be too happy. But as for Ryan, ‘he’s got enough money for 100 lifetimes,” says Chas Lacaillade, the founder and CEO of Bottle Rocket Management, which represents many unboxers, in a Forbes report.