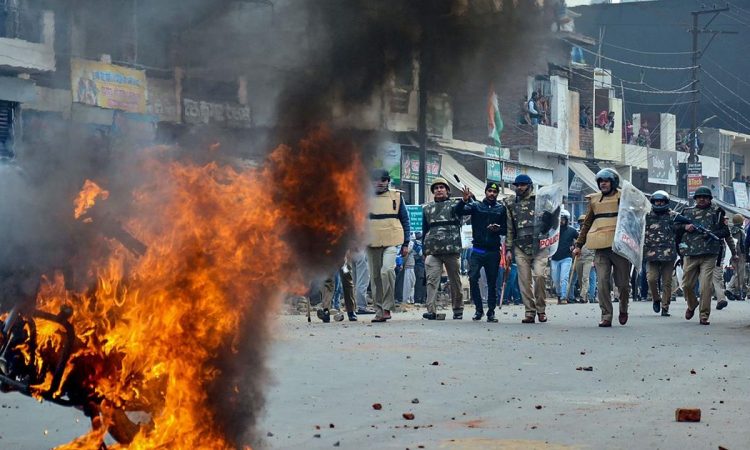 Kanpur/Lucknow/Meerut, December 20: Seven people have succumbed to their injuries in various districts of Uttar Pradesh while 12 people were injured in Kanpur on Friday, doctors in government hospitals said, as thousands protesting against the new Citizenship Act clashed with the police in many areas of the state.
In Meerut, the Chief Medical Superintendent, Meerut Medical College said: “Three policemen with injuries from the stones they were pelted with are admitted here. About half a dozen locals with injuries–one serious, too are here.”
“Of the five civilians with bullet injuries brought to the medical college hospital, two were brought dead. One has been identifed as Noor Alam from Muzafarnagar while the identity of the others is unknown,” said the CMS, Meerut Medical College.
Nine people with gunshot injuries were taken to Lala Lajpat Rai Hospital in Kanpur, which is about 90km from the state capital of Lucknow, doctors said.
“Three have bullet injuries in the abdomen, one in the chest and the rest all have injuries in their limbs,” the hospital’s head of department (surgery) Dr Sanjay Kala said.
“I have a bullet injury in my abdomen. The police engaged in unprovoked, aim-and-shoot direct firing at us,” Md Saif, one of the injured at the hospital, said.
Additional director general (ADG) of police (Kanpur zone), Prem Prakash, denied there was any firing.
“I have no knowledge of any firing. If at all it took place, then it must be plastic pellets and injuries would be minor,” Prakash said.
District Magistrate, Kanpur, Vijay Vishwas Pant said, “Mobile internet will stay cut off for one more day–till Saturday night in Kanpur.”
Tension simmered in other several cities—Gorakhpur, Deoband (Saharanpur), Muzaffarnagar, Hapur, Shamli, Prayagraj, Bulandshahr, Meerut, Firozabad, Varanasi, Farukkhabad, Bijnore, Bhadoi and Hamirpur—as thousands defied pleas by authorities to exercise restraint a day after large-scale violence was reported across the state.
“The situation is tense in some districts. An adequate police force has been deployed to contain the situation,” inspector general of police (law and order), Praveen Kumar, said.
Seven people were injured in police firing in the protest at Babupurwa locality in Kanpur, where massive protests broke out in several localities after Friday prayers as thousands defied the prohibitory orders under Section 144 of the Code of Criminal Procedure (CrPC).
Protesters marched in a long procession from Halim Muslim College to Phoolbagh—a distance of nearly 4km. Several participating in the procession engaged in vandalism as they reached Yatimkhana and damaged a showroom and a three-wheeler and pelted the police with stones.
Police began lathicharge to disperse the crowd. The situation came under control after Sheher Qazi Alam Raza Noori asked the crowd to end the protest and disperse.
Violent protests were also reported from Firozabad after people coming out from Friday prayers clashed with police. Police had to face stone-pelting by an angry mob, which burnt down a few vehicles, and reports of firing came in as well.
Heavy police force was deployed in Firozabad amid apprehension of protests against CAA and internet services were suspended for Friday.
Protests and tension was also reported in Shamli, Hapur and Muzaffarnagar.
In Shamli, a large number of people gathered at the Azad Chowk with placards after the Friday namaaz and shouted slogans. The police used mild lathi-charge to disperse the crowd.
In Hapur, intense protests began after the Friday prayers as protesters also pelted the police with stones. Similar scenes were reported from Muzaffarnagar.
In Gorakhpur, stone-pelting protesters were lathi-charged by police. People wore black ribbons, shouted slogans and waved the tricolour while protesting after the Friday prayers.
In Deoband, nearly 2500 people gathered and marched from Sarfata Bazar to Khanka police outpost. They held placards with anti-CAA slogans and several of them also had the national flag as they marched towards Shastri Chowk.
The situation was peaceful in Varanasi as people protested against CAA after Friday prayers in Nadesar area. They submitted a memorandum addressed to President Ram Nath Kovind against CAA to police officials.
Friday prayers also passed off peacefully in Prayagraj with the district administration keeping a close vigil in and around several mosques in the city.
After offering Friday prayers, members of the Muslim community took out a procession from outside the Jama Masjid in Chowk but were stopped by the police near Shahganj locality by barricading the road.
The crowd tried to proceed but called off the procession and dispersed after a call by the Sheher Qazi to leave.
A 25-year-old man was killed in Thursday’s violence and more than 35 people, including 16 policemen, were injured in the protests against the citizenship act in Lucknow.
Police on Thursday had resorted to baton charge, fired tear gas shells and used water cannons to control the situation and chase away the violent mob in several areas of the state capital.
Internet and text messaging services were suspended in 14 districts of Uttar Pradesh, including Lucknow, following Thursday’s large-scale violence as protests against CAA spun out of control in these areas.
As many as 3,505 people have been kept under preventive custody, according to authorities. More than 200 people were detained for questioning during a midnight crackdown in search of those involved in arson and vandalism in Lucknow. (Agencies)