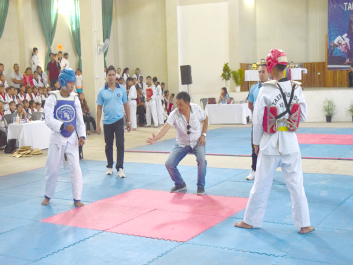 Dimapur, November 1: The 6th Faith in Action Taekwondo Championship began today at Dimapur Government College auditorium, where 10 schools from Nagaland and one from Tripura are participating. There are more than 300 participants in different categories.
Inaugurating the championship, President, Nagaland Pencak Silat Association, Khevishe Sema said taekwondo brings mental benefit, physical fitness and build self confidence among people who practice this martial art.
He said the both taekwondo and pencak martial arts form are similar in nature, adding that pencak is indigenous martial arts which originated from Malasiya and it has been indigenous game of South East Countries. He disclosed that 93 countries are affiliated with the Pencak Association.
Khevishe said in India, Pencak got recognition in 2009 and in Nagaland it was established in 2016 and got recognition on May 16, 2019.
He also disclosed that in this martial arts, there are 34 medals, which is highest in any sports discipline in the world. He further said that Nagas have inborn talent for martial arts and they should take up this individual sports.
He said that Khelo India would be held in Guwahati from January 18 to 30 and hoped that Pencak would be included in that.
Organized by Faith in Action Taekwondo Academy and promoted by Nagaland Pencak Association, the Championship would conclude on Saturday.
(Page News Service)