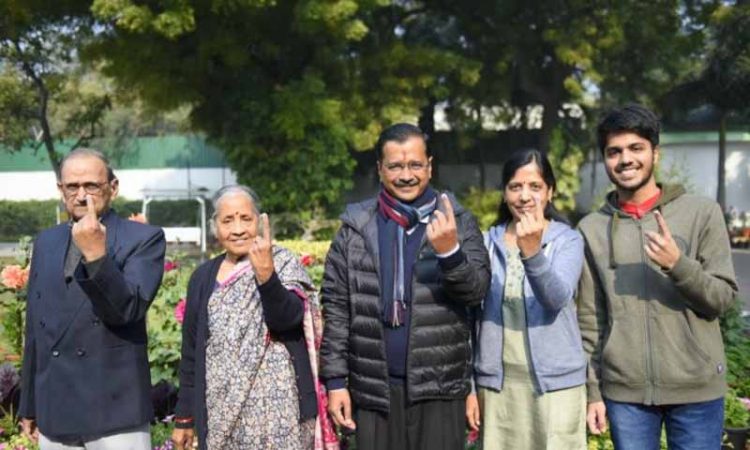 New Delhi, February 8: Delhi recorded 61.46% voter turnout on Saturday, down from 67.47% in 2015 assembly election, with exit polls predicting an easy win for AAP, which sought to retain power on development plank, against the BJP that ran an aggressive campaign centred around the issues of anti-CAA protests and nationalism.
The polling went off peacefully, Delhi Chief Electoral Officer Ranbir Singh told reporters.
Over 60,000 security personnel, including Quick response teams, had been deployed for the election while police and paramilitary forces conducted flag marches in sensitive areas.
The voting percentage was 57.04 till 6 pm deadline, and rose to 61.46% as those in queues at polling stations were allowed to vote, poll officials said, adding it may increase further.
The officials said Mustafabad (66.29%), Matia Mahal (65.62%) and Seelampur (64.92%) — all three with large Muslim population — recorded the highest voting percentage till 5 pm.
Long queues were seen outside polling stations in areas like Jaffrabad, Jamia Nagar, Turkman Gate and Shaheen Bagh which have been witnessing protests against the Citizenship Amendment Act (CAA).
In the 11 districts in the national capital, northeast recorded 65.24%, northwest (62.23%), south (59.65%), central (58.57%), southwest (61.57%), east (61.29%), west (61.79%), north (57.19%), New Delhi (56.10%), Shahadra (62.96%), southeast (54.89%).
On a sit-in for over a month against the Citizenship Amendment Act, women protesters at Shaheen Bagh in south-east Delhi voted in batches “so that the agitation remains unaffected”.
Mehzabeen Qureshi, who returned to the protest site after voting said, “I stayed at home to let other women in the house go out and vote. Now I have joined them here at Shaheen Bagh after voting. I voted today to secure democracy”.
Polling started at a sluggish pace and the voting percentage was low till noon. However, it picked up pace as the day grew warmer.
A senior Delhi poll official said the lower turnout compared to 67.47% in the 2015 Assembly polls could be attributed to the polling day falling on a weekend as a section of people may have gone out of the city. The voting percentage was 60.6 in 2019 Lok Sabha election.
A poll officer died at a polling booth at Babarpur, just before the voting began, Singh said.
Congress’ Chandni Chowk candidate Alka Lamba got into an altercation with an AAP worker outside a polling booth and tried to slap the man, but missed.
Lamba alleged that the man used “very foul” and objectional language against her.
Free electricity and water, development, jobs, national security and CAA were among the key issues on the minds of Delhiites in the polls where 672 candidates were in the fray in 70 Assembly seats.
Exit polls have predicted a clean sweep for the ruling Aam Aadmi Party while the BJP was a distant second.
Most exit polls also predicted that Congress is unlikely to open its account even this time in Delhi, which it ruled from 1998-2013.
After the polls ended, BJP President J P Nadda held a meeting with party’s Delhi unit leaders and took stock of the situation. Delhi BJP chief Manoj Tiwari put up a brave face amid prediction of defeat for his party, claiming it will win 48 seats and form a government in the city.
AAP leader and Delhi Deputy Chief Minister Manish Sisodia said his party is going to win with a big margin.
There were some complaints related to VVPAT slips. Congress’ New Delhi candidate Romesh Sabharwal said VVAPT slips did not show his name and photo.
“I gave a written complaint to poll authorities after which the machine was replaced,” Sabharwal said, adding that polling was halted for sometime.
Chief Electoral Officer Ranbir Singh said that Voter-Verified Paper Audit Trail (VVPAT) failure was only one per cent this time.
“There was very little VVPAT failure this time. In the Lok Sabha election, the VVPAT failure was more than 12.5% and this time it is less than 1%,” he said.
“Because of our enforcement and preventive action we took, the elections went off peacefully,” Singh told reporters.
Police said over 200 calls related to election complaints were received at the Delhi Police’s control room on the polling day.
First time voters and women turned out in large numbers. More than 60 centenarians voted in the assembly polls, Singh said.
President Ram Nath Kovind, former prime minister Manmohan Singh, Congress President Sonia Gandhi, Rahul Gandhi, Priyanka Gandhi Vadra, West Delhi MP Parvesh Verma and Delhi BJP chief Manoj Tiwari also exercised their franchise. Union Ministers S Jaishankar and Hardeep Singh Puri were also among those who cast their votes.
Chief Minister and AAP national convener Arvind Kejriwal voted at Rajpur Transport Authority polling station in the Civil Lines area.
Kejriwal, who is contesting the polls from the New Delhi constituency, was accompanied by his wife Sunita and son Pulkit. Before leaving for voting, he sought his parents’ blessings. (PTI)