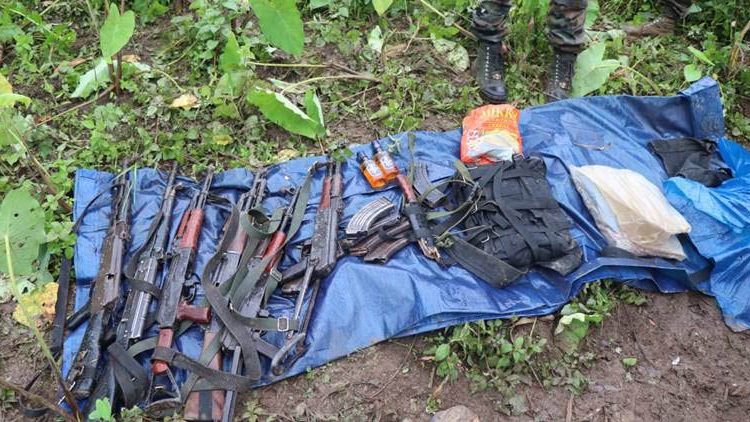 Dimapur, July 11: A team of Indian Army, Assam Rifles and Arunachal Police in a joint operation neutralized six active cadres of NSCN (IM) near Nginu in Longding District of Arunachal Pradesh in the early hours of July 11.
A defense release said based on a specific intelligence regarding presence of armed cadres of the NSCN (IM), the troops launched a well planned and coordinated operation in the area. On seeing the search column of troops, the insurgents opened heavy volume of fire in a bid to flee from the spot. The troops retaliated and in the ensuing firefight six cadres were neutralized while one soldier of Assam Rifles was injured, the release said.
The troops recovered six rifles and ammunition, IEDs and other warlike stores.
The release said operation is in progress, identification of neutralized cadres and their allegiance to NSCN (IM) faction operating in Myanmar is being ascertained while the injured soldier has been evacuated and is in stable condition.
Cache of ammunition recovered
As part of the ongoing crackdown by Assam Rifles on insurgent groups operating in Nagaland, a huge cache of ammunition was recovered near Chedima village in Kohima District on July 10.
A defense release said based on specific intelligence regarding a large cache of arms and ammunition, the troops launched an operation in the area and during detailed search the troops unearthed a large cache of ammunition. These included three 60 mm mortar bombs, two M-60 anti-tank rifle grenades, 390 rounds of 7.62 mm sniper,109 live rounds of 7.62 mm AK-47, 51 rounds of 7.62 mm pistol, three Kgs of PEK (explosive) and one AK-47 magazine.
The recovered items were handed over to North Police Station, Kohima for further investigations.
NSCN (IM) cadre apprehended
Troops of Assam Rifles in an operation along with Nagaland police apprehended an active cadre of NSCN (IM) near BOC, 5th Mile in Dimapur District on July 9.
Another defense release said the AR and police team launched an operation and apprehended ‘ss’ Leacy of NSCN (IM) from the area. The team also recovered one point 22 mm pistol with five live rounds of ammunition.
He along with recovered items has been handed over to Diphupar Police Station for further investigations. (Page News Service)