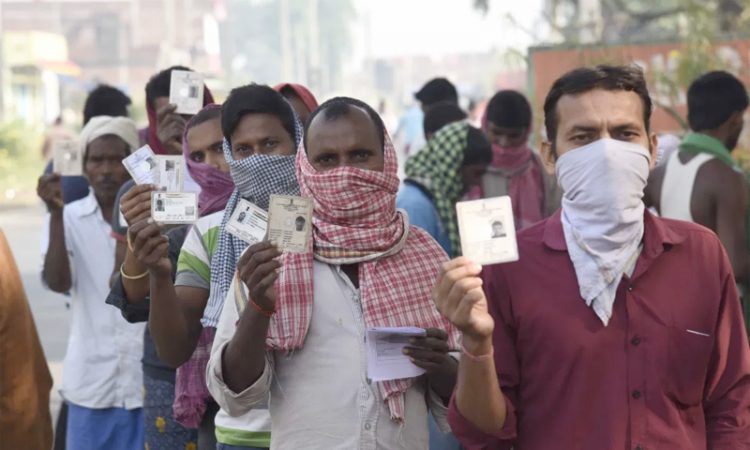 Patna, November 3: As electors in 94 constituencies of Bihar exercised their franchise in the second phase of voting on Tuesday, polling of over 54% was recorded. According to the Election Commissions, the voting percentage at 10:30 pm was 54.64, marginally lower than the 2015 figure, as COVID-19 failed to dampen the democratic spirit of citizens.
The second phase, which will decide the electoral fate of RJD leader and Mahagathbandhan’s chief ministerial face Tejashwi Yadav, and more than 1,450 other candidates, saw prominent personalities, including Chief Minister Nitish Kumar, his deputy Sushil Kumar Modi, Tejashwi Yadav, and LJP president Chirag Paswan cast their votes in their respective polling booths in the morning.
After casting his vote at a polling booth in Patna’s Rajendra Nagar, Deputy Chief Minister Sushil Kumar Modi appealed to people to step out of their homes, cast votes, maintain social distancing and wear masks. Meanwhile, former Bihar CM Rabri Devi asserted the need for change and development in the state.
Even though no untoward incidents were reported throughout the day, the time for concluding the polling was extended by one hour till 6 pm to facilitate COVID-19 patients and those with symptoms of the disease to exercise their franchise during the final hour. The election process was largely, peaceful. (IE)