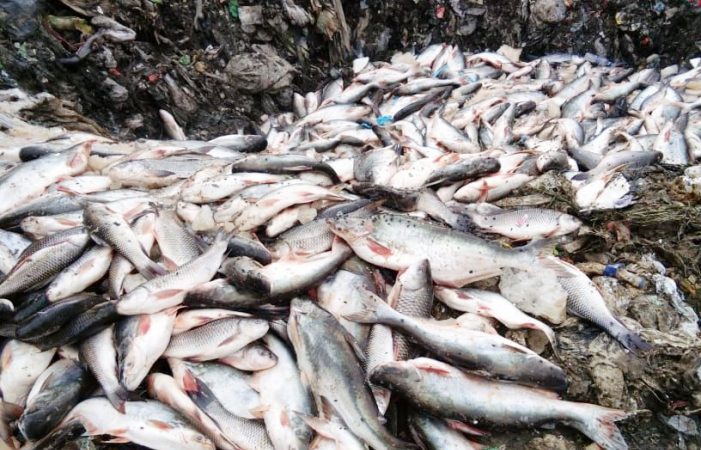 Kohima, June 25: The Kohima Municipal Council (KMC) along with food safety officials from Health & Family Welfare Department seized over 5000 kgs of fishes treated with formalin from the outskirt of Kohima during wee hours of Monday. Formalin is a toxic and carcinogenic chemical commonly used to preserve dead bodies in mortuaries.
Food safety officials from Health & Family Welfare Department intercepted four pick-up trucks and seized 5280 kgs of fishes from the four trucks bound for different destinations.
The huge amount of fish treated with formalin to prevent the fish from rotting during transportation was seized at the Kohima Municipal Council Toll Tax by-pass.
As per the directive of the Food and Safety, H&FW Department, KMC members on duty made the seizure.
A team of officials led by
Food safety officer, Kezhangulie Yimchungru and State Public Health Laboratory (SPHL) technical team tested the fishes at the seized site.
The four seized pick-up mobile trucks were carrying Pankaj (3360 kgs), Rahu (1720kgs) and Catla (200kgs). One of the trucks carrying 30 boxes of variety of fishes and six drums of live fish was on its way to Pfutsero, Phek. The trucks were carrying 42 boxes of Rahu fishes, 84 boxes of Pankaj fish and five boxes of catla fish with each box weighing 40 Kgs while the drums carrying live fish weighed 45 kgs each.
When tested, 1.5 mg formalin was found in the fish and even the ice cubes were found contaminated containing 0.10 mg formalin.
Health officials here are yet to receive the SPHL lab for testing food items.
Considering the health threat of formalin in fishes, Yimchungru said such investigations should be done from the main entry point in Dimapur.
The seized vehicles were taken to south police station and the formalin fishes were destroyed at KMC dumping Monday evening in presence of District Administration and officials from the Health and Family Welfare Department led by Commissioner & Secretary I Himato Zhimomi.
Recently the State Government has banned fishes treated with formalin and warned of heavy penalty if found selling such fish in the market. “Failure to comply with the provision of the Food Safety and Standard Act 2006 and the Notification will attract penalties upto to Rs. 10,00,000 with imprisonment under Section 59 of the Food Safety and Standards Act 2006,” stated the notification issued by Commissioner & Secretary, Health and Family Welfare Department I. Himato Zhimomi.
Meanwhile, FSSAI Nagaland branch has cautioned consumers against any packaged drinking water not having BIS certification of FSSAI and sale of which invites liability and punishment with imprisonment under FSSAI Act.
In addition to use of formaldehyde for preserving fish or packaged water sold without FSSAI certificate, even use of common plastic for packaging water is also found to be harmful in the long run. A report stated that as plastic affects human health, toxic chemicals leach out of plastic and are found in the blood and tissue of nearly all people. Prolonged consumption of water packaged in ordinary untreated plastic was suspected to be linked to cancers, birth defects, impaired immunity, endocrine disruption and other ailments.
The market is also flooded with food items that are adulterated with artificial non-edible colours found in powdered spices and also using Carbide Gas for artificially repining of fruits that are very harmful for human consumption.
For the uninitiated, preservatives are a type of food additive that is put into packaged food to prolong its shelf life, enhance the taste or keep the colour and nutrients of the product intact.
Another harmful substance used in food items– Propyl gallate – an antioxidant preservative, is used to prolong life of fats and oils– such as in vegetable oil, chewing gum, meat products, and chicken soup base.
It was also said that prolonged use of items having propyl gallate may cause cancer. (Page News Service)