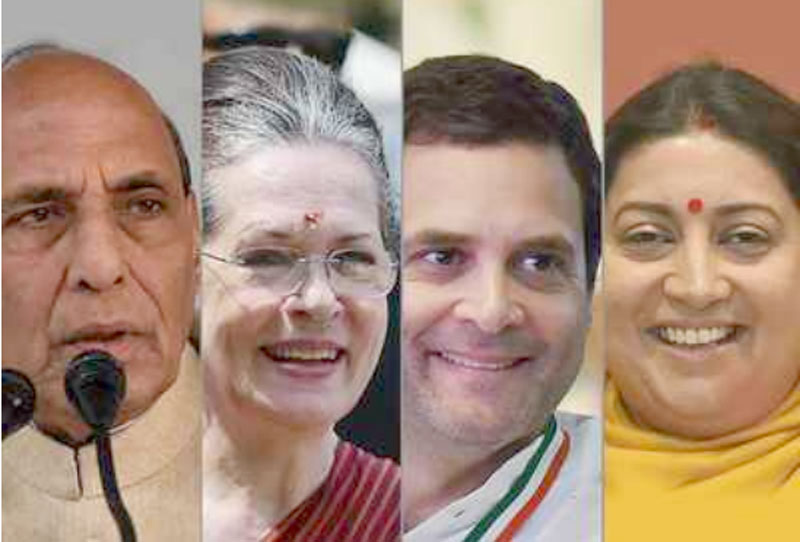 NEW DELHI, May 5: Nearly nine crore voters will decide the fate of 674 candidates, including political bigwigs such as Rajnath Singh , Sonia Gandhi, Rahul Gandhi and Smriti Irani in the fifth phase of polling on Monday in 51 Lok Sabha constituencies in seven states.
The stakes are high for the ruling BJP and its allies as it had swept 40 of these seats in 2014, leaving just two for the Congress and the rest for other opposition parties such as the Trinamool Congress (7).
Voting will take place in 14 seats in Uttar Pradesh, 12 in Rajasthan, 7 seats each in West Bengal and Madhya Pradesh, 5 in Bihar and 4 in Jharkhand. In Jammu and Kashmir, polling will take place in Ladakh constituency and Pulwama and Shopian districts of Anantnag seat.
The Election Comission has set up 94,000 polling stations/booths and made elaborate security arrangements. In the fifth and smallest phase, a total of 8.75 crore voters will decide the fate of 674 candidates.
With this phase, election will be over in 424 seats and polling in the remaining 118 seats will be held on May 12 and 19.
The fifth phase of polling in 14 Lok Sabha seats in Uttar Pradesh will see a clash of titans, including Union ministers Rajnath Singh and Smriti Irani, UPA chairperson Sonia Gandhi and Congress president Rahul Gandhi.
The BJP had bagged 12 of these seats in 2014 with the Congress winning Sonia Gandhi’s Rae Bareli and Rahul Gandhi’s Amethi – the only two constituencies where the Congress succeeded out of the 80 in the entire state.
The Bahujan Samaj Party (BSP) is contesting on five seats – Dhaurahra, Sitapur, Mohanlalganj, Fatehpur and Kaisarganj. Its ally Samajwadi Party (SP) is fighting for seven seats – Lucknow, Banda, Kaushambi, Barabanki, Faizabad, Bahraich and Gonda.
In Amethi and Rae Bareli, the SP-BSP alliance has not put up any candidate, leaving the two constituencies for the Congress.
Union home minister Rajnath Singh is seeking re-election from Lucknow, while his colleague at the Centre Smriti Irani is again taking on Rahul Gandhi in Amethi.
Two former Olympians, one former IAS and one former IPS officer, and two seers are among the 134 candidates whose fate will be decided by voters in Rajasthan’s 12 Lok Sabha seats on Monday. After this phase, polling will come to an end in the desert state.
Former Olympians Rajyavardhan Rathore (BJP) and Krishna Poonia (Congress) have locked horns in the Jaipur Rural seat.
In Bikaner, Union minister and former IAS officer Arjun Ram Meghwal (BJP) is facing a tough fight from his cousin and Congress candidate Madangopal Meghwal, a former IPS officer. Two seers – Sumedhanand Saraswati and Baba Balaknath – are contesting the polls from Sikar and Alwar respectively.
In the seven Lok Sabha constituencies spread across three districts in West Bengal, it is a four-cornered contest between the Trinamool Congress, BJP, Congress and the CPM. The Trinamool had won all the seven seats in 2014.
The Bangaon Lok Sabha seat will witness an interesting battle between sitting MP Mamata Bala Thakur of the Trinamool and her nephew Shantanu Thakur of the BJP. They hail from the numerically strong Matua community, which both parties are trying to woo.
Of the five seats in Bihar, Hajipur and Saran are considered pocket boroughs of the Lok Janshakti Party (LJP) of Ram Vilas Paswan and the RJD of Lalu Prasad respectively. The other three constituencies are Muzaffarpur, Sitamarhi and Madhubani. Both Paswan, a Union minister, and Prasad, serving jail term in fodder scam cases, are not in the fray, but their parties are making all-out efforts to retain their influence.
In the four seats in Jharkhand – Hazaribagh, Koderma, Ranchi and Khunti, polling will be held between 7am and 4pm. Voting ends two hours before the scheduled time in other constituencies due to security reasons as some areas are affected by LeftWing Extremism.
While Union minister of state for civil aviation Jayant Sinha (BJP) is seeking re-election from Hazaribag, former chief minister and BJP candidate Arjun Munda is taking on Kalicharan Munda of the Congress in the Khunti constituency. This will be the second phase of polling in Madhya Pradesh, the first phase having been held on April 29. These seven constituencies – Tikamgarh, Damoh, Khajuraho, Satna, Rewa, Hoshangabad and Betul – were won by the BJP in 2014.
The Congress, which came to power in the state in December last year after 15 years, hopes to carry forward the winning momentum while the BJP hopes to repeat its 2014 showing.
Former chief minister and PDP president Mehbooba Mufti is pitted against state Congress president G A Mir in the Anantnag Lok Sabha constituency where polling is being held in three phases due to security reasons.
Election to 542 Lok Sabha seats is being conducted in seven phases between April 11 and May 19. Election in Vellore constituency in Tamil Nadu has been cancelled following excess use of money power. Results will be declared on May 23. (PTI)