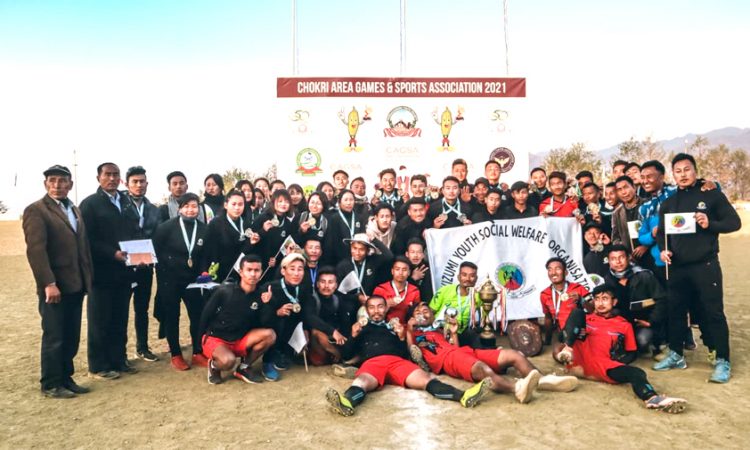 In a remarkable feat for the Thenyizumi team, they lifted the football trophy for both men and women of this golden jubilee edition.
Playing in men’s football final match, host team Phüsachodü got off to an energetic start as they dominated the game with ball possession, while Thenyizu replied by counter attacks. It was the host team who deservingly took the lead in the first half through Dzüthotsoyi Medeo . They should have double thier lead with thier strikers missing the final touch.
In the second half, Thenyizu tried to fight back to get their equalizer back but couldn’t break the defensive side. With the match ending in favor of the host team, luck struck the Thenyizu team as in the dying minutes, Thenyizu team were awarded a penalty for a handball inside the area, their talisman Nusezo Kezo slotted the equaliser for the team to make it 1-1.
During the extra additional time, Verhasu Resu pounch a defensive error to slot home the lead, while midfielder Vekhruto Resu finished off the game by scoring the third goal in 105th minutes to hand the victory.
The team lifted Lt. Kronyi Kapuh memorial trophy for men football with a cash prize of Rs. 1 lakh.
Nusezo Kezo and Anukho Theyo of Thenyizu were awarded golden boots award and golden gloves, while Zhoveto Chuzho of Phüsachodü was awarded the player of the tournament.
In women football final, Thenyizu and Phüsachodü scored a goal each during the match to decide the winner via tie breaker.
Thenyizu team broke the hearts of the host team again as they conquered the trophy via penalty shootout 3-1 to take Lt. Vezopra Nyekha Memorial trophy along with a cash prize of Rs. 30,000.
Shodulü Swiho and Sekhonolü Kezo of Thenyizu team were awarded Golden Boots and Golden Gloves and Zuniekholu Khamo was awarded the player of the tournament.
In men’s volleyball final match, the Chetheba team emerged victorious against defending champs Thenyizu.
Chetheba team who had lost five consecutive final against Thenyizu in the area meet managed to overpowered the defending champions Thenyizu team in the sixth meeting by winning 3-1sets in the final.
Thenyizu had defended their title for the seven consecutive times in the area meet but failed to retain the title in the jubilee edition handing over the trophy to the new champions.
Volleyball veteran player Vesacho Resu who had participated in the area meet for more than 20th editions had an emotional day for him to remember the volleyball championship trophy which was the much needed trophy in his cabinet. The team celebration went wild as they celebrated the first volleyball championship to lift Lt. Husazo Swüro memorial trophy and received a cash prize of Rs. 50,000.
While, Phüsachodü team outsmart Chetheba to take women volleyball trophy donated by Mudovehu Yhobu carrying a cash prize of Rs. 20,000.
Venuzo Dawhuo of Thenyizu and Huvosalu Chuzho of Phüsachodü were adjudged as the most valuable player (MVP) of men and women volleyball.
In men’s basketball, Thenyizu outclassed Chetheba with 35-19 points to emerged victorious in the final match. They received Lt. Vekhoto Chotso memorial trophy with a cash prize of INR. 50,000.
While in women basketball, Chetheba team beat host team Phüsachodü to take Pungotolu Puro trophy along with a cash prize of INR. 20, 000.
Bedukho Swüro and Ravolu Nyekha both from Chetheba were adjudged as the most valuable player (MVP) in basketball game for men and women respectively.
The jubilee edition, Thipuzu team took the group champion, Cüvoto Medeo of Khulazu Bawe retained the individual champion for securing two gold and one silver, while Mery Chuzho of Thipuzu with three golds (800m, 1500m and 3000 meter race) was adjudged as individual champion for women category for excelling in filed and track events.
Dr. Chotisuh Sazo, member of Nagaland Legislative Assembly gracing the closing ceremony as guest of honour impressed upon the players to value their talents and give their best in their respective discipline to participate in the higher level. Despite the 50th edition, he said the area was yet to find any players at the international level and called upon the players to continue giving their best as to attain their desired goals.