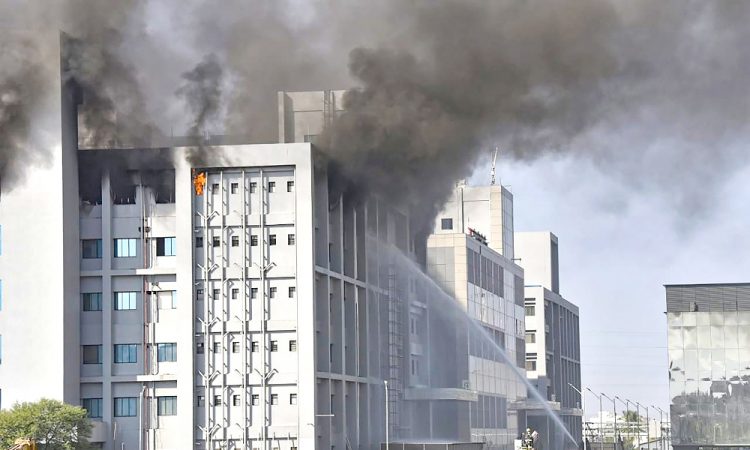 Smoke billows out after a fire broke out at the Serum Institute of India, in Pune on Thursday. PTI Photo

Pune, January 21: Five persons died and 9 were evacuated from a building in the Serum Institute of India’s Manjari premises here after a fire broke out at the facility on Thursday, police said.

Covishield vaccine production won’t be hit due to the fire, Serum Institute of India CEO Adar Poonawalla said.
The Manjari facility is where the Covishield vaccine used in the nationwide inoculation drive against the pandemic is made. The building where the fire broke out is part of the under-construction site of the Serum facility and is one km from the Covishield manufacturing unit, sources said.
“I would like to reassure all governments & the public that there would be no loss of #COVISHIELD production due to multiple production buildings that I had kept in reserve to deal with such contingencies at @SerumInstIndia,” Poonawalla tweeted.
“We have just received some distressing updates; upon further investigation we have learnt that there has unfortunately been some loss of life at the incident. We are deeply saddened and offer our deepest condolences to the family members of the departed,” Poonawalla added.
Mayor Murlidhar Mohol said it appears the five persons who died in the fire were working on the building floor. Fire officials recovered the bodies during an inspection, he said.
Maharashtra Deputy Chief Minister Ajit Pawar said the state government has ordered a probe into the blaze.
The fire, which broke out at 2.45 pm on the fourth and fifth floors of the SEZ 3 building in the Serum Institute premises, was brought under control in two hours, police said.
Deputy Commissioner of Police Namrata Patil told PTI that nine people were evacuated from the spot after the fire broke out.
Viral visuals from the site showed smoke billowing out from the Serum Institute facility.
Chief Fire Officer Prashant Ranpise said cooling work has commenced at the spot. Fifteen water tankers were pressed into action and the fire was brought under control around 4.30 pm, he said.
“The cause of the fire is yet to be ascertained.
Furniture, wiring, cabins were gutted. No major machinery or instruments were stored on the floors where the fire broke out,” he said.
“I have taken information from the Pune Municipal Corporation about the incident and instructed locals officials to carry out a detailed probe into the fire,” Ajit Pawar said.
Chief Minister Uddhav Thackeray told reporters that as per initial information, an electrical fault caused the fire.
“As per initial information, the fire did not erupt at the unit where the COVID-19 vaccine is being produced, but in the unit where the BCG vaccine is produced,” Thackeray said. (PTI)