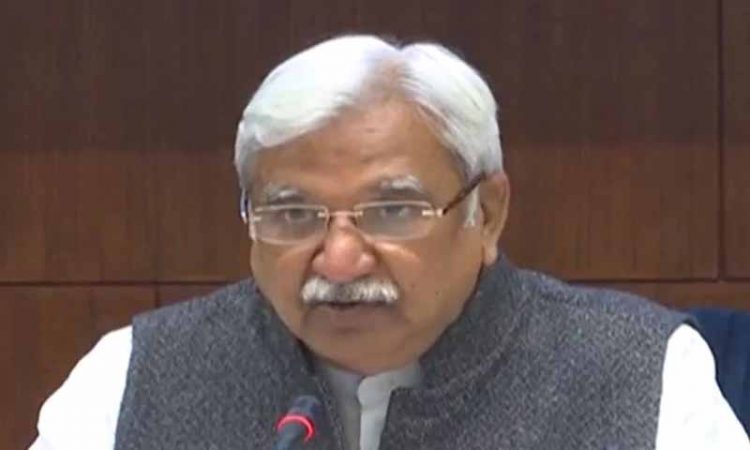 New Delhi, February 26: Voting for five assembly elections will begin on March 27, with West Bengal conducting the maximum eight phases continuing till April 29, and votes for the polls in the four states and one union territory will be counted on May 2, the Election Commission said on Friday.

As many as 18.68 crore voters will be eligible to cast their votes at 2.7 lakh polling stations for 824 assembly seats across Assam, West Bengal, Kerala, Tamil Nadu and Puducherry.
The elections for the five assemblies are expected to witness a determined attempt by the BJP to put a strong show, including in Assam where it is already in power, as well as in West Bengal, Kerala, Tamil Nadu and Puducherry where the saffron party has been pushing hard in recent years.
Elections in Assam will be conducted in three phases on March 27, April 1 and April 6, while polling in Kerala, Tamil Nadu and Puducherry will take place in a single phase on April 6.
Elections for the West Bengal assembly will be held in eight phases, up from seven last time, beginning with polling for 30 seats on March 27, Chief Election Commissioner Sunil Arora said while announcing the poll schedule.
The second phase of West Bengal’s assembly elections has been scheduled for April 1 and will cover 30 constituencies, followed by the third phase on April 6 for 31 seats, the fourth on April 10 for 44 constituencies, the fifth on April 17 for 45 seats, sixth for 43 seats on April 22, seventh phase on April 26 for 36 seats and last and eighth phase on April 29 for 35 seats, Arora said.
The Election Commission will appoint two special observers for West Bengal and a third can also be sent if required, Arora said in response to queries on whether enough arrangements are in place for the polls in the state, where many have been raising questions about political violence.
Responding to questions on the increased number of phases in West Bengal, the CEC said when the EC assesses the law and order situation, the assessment is based on several factors.
“Afterall the elections to West Bengal (assembly) in 2016 was in seven phases. The Lok Sabha was in 7 phases. So, 7 to 8 (phases) is not such a big deal because we also have to see the movement of forces, we also have to see the current charges and counter-charges (by political parties).
“We have to kind of find a way out. That is why we are sending two expenditure observers to Tamil Nadu and two police observers to West Bengal,” Arora explained.
He said the Commission has requested the Ministry of Home Affairs to provide two or three BSF helicopters so that the observers can visit various places for on-the-sot checks. The helicopters would be utilised for all the four states and the Puducherry UT.
On Assam, he said the number of phases have been increased from two to three this time keeping in mind the security scenario.
Responding to questions on Tamil Nadu and efforts to curb the influene of back money, Arora said the state is “expenditure sensitive”. He recalled that polls to Vellor constituency and R K Nagar seat had to be rescinded. He said the R K Nagar polls were rescinded on two occasions.
Arora also said everyone on election duty for the upcoming polls will be vaccinated against COVID-19 before polling day.
Voting will take place for 126 seats in Assam, 234 in Tamil Nadu, 294 in West Bengal, 140 in Kerala and 30 in Puducherry.
Arrangements will be put in place for candidates to file their nominations online. Voting will be allowed for an additional hour, keeping in mind COVID-19 safety guidelines, he said.
Also, webcasting arrangements will be in place at polling stations in critical and vulnerable areas, while adequate CAPF (Central Armed Police Forces) deployment will be ensured, Arora said. All critical and vulnerable areas have been identified and advance teams have been already deployed across the four states and one union territory, he added.
He said door-to-door campaigning will be restricted to five persons, including the candidate, while roadshows will be allowed with a maximum of five vehicles.
According to Arora, the nationwide vaccination drive has made the situation more conducive for conducting elections and the Health Ministry has declared everyone on poll duty as frontline workers for vaccination purposes.
All poll officials will be vaccinated before the elections, Arora said.
Arora, who will demit office on April 13, also said all must be congratulated for the successful conduct of elections in Bihar last year despite the COVID-19 challenges and he is confident of success once again.

The Commission also announced bypolls to the Malappuram Lok Sabha constituency in Kerala and Kanniyakumari parliamentary seat of Tamil Nadu.
The bypolls would be held on April 6 aong with assembly elections in the two states. The results of the bypolls to Kanyakumari and Kanniyakumari Lok Sabha seats will be declared on May 2.
The Kanyakumari Lok Sabha byelection was necessitated following the death of Congress MP H Vasanthakumar who died of Covid-19 in August 2020.
Bypolls to the Malappuram seat was necessitated following the resignation of IUML leader K Kunhalikutty. (PTI)