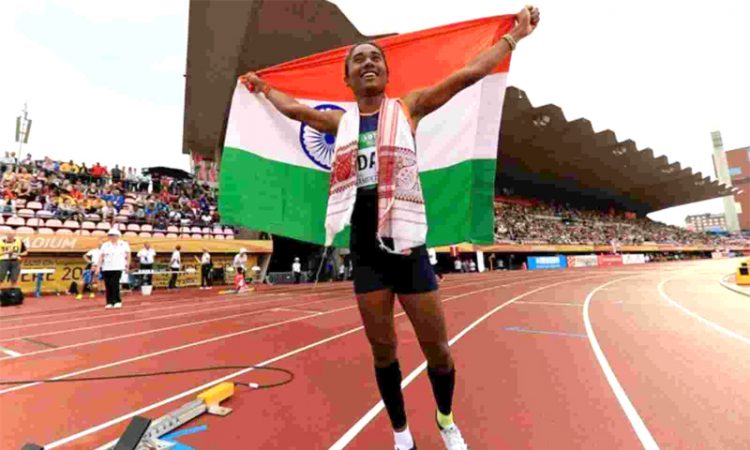 New Delhi, April 19: Star sprinter Hima Das is confident that the Indian women’s 4x100m relay team, of which she is a part, can qualify for the Tokyo Olympics during the World Athletics Relay in Poland next month.

The top eight finishers in the World Relays on May 1 and 2 at Chorzow in Selisia will get automatic berths in the Tokyo Games, which is scheduled to begin on July 23.
Hima, who is yet to qualify for the upcoming Olympics, is set to be a key member of the Indian 4x100m relay quartet, with the other three likely to be national record holder Dutee Chand, Archana Susenndran and S Dhanalakshmi.
Himashree Roy and AT Dhaneshwari are the other members of the 4x100m relay team named by the Athletics Federation of India (AFI).
“Dutee will also be a part of the team, we are confident that we can qualify for the Olympics during the World Relays. We should do it,” Hima told PTI in an interview.
“I am in very good shape and the other members are also doing good and preparing well. We have done really well (in the individual 100m) during the Federation Cup,” she added.
The 100m event in the Federation Cup in March was won by Dhanalakshmi in 11.38 seconds while Chand and Suseendran were second and third with 11.58 and 11.76 respectively.
Hima had won one of the preliminary heats in 11.63 but was disqualified in the final race after a false start.
The 21-year-old from Assam, known as the ‘Dhing Express’, said she will be running mostly 100m and 200m in the training-cum-exposure tour of Turkey planned by the AFI from later this month.
“I will be running 100m and 200m during training. I will also take part in competitions (Olympic qualifying events) in an around Turkey,” she said.
Hima is the reigning world junior 400m champion and silver medallist in the 2018 Asian Games in the one-lap race but has run only 100m and 200m this season.
Asked if she will run 400m this season, she said, “It is a decision to be taken by coach (Galina Bukharina) and the AFI. Everybody knows I have some issues in 400m, could not complete in the 2019 Asian Championships.”
Hima set a national record of 50.79 seconds in 400m during the 2018 Asian Games but a back injury forced her to pull out midway through the one-lap race at the Doha Asian Championships in April 2019.
She ran two 400m races in the Czech Republic in 2019 but she only clocked 53.07s in her last race in August that year. She missed the 2019 World Championships in September due to the back injury.
Hima, a brand ambassador of Adidas, also spoke about the German sportswear giant’s new initiative through a global film series launched on Monday.
Across 20 films, including those of Ranveer Singh, Hima, Beyonce, Paul Pogba, Mo Salah and Siya Kolisi, stories were told through rare footages to show sport culture around the world with tagline ‘Impossible is Nothing’.

“This perfectly suits me because I would not have come this far in my career had I thought it was impossible,” Hima said. (PTI)