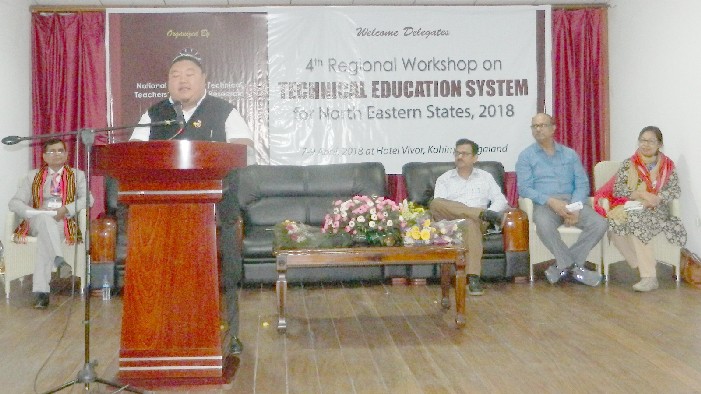 Kohima, AprIL 7: Nagaland Chief Minister, Neiphiu Rio while expressing that technical education plays an important role in skilling the youths, today stressed on the need for technical institution and polytechnics the region introduce courses which are in tune with the requirements of the modern society.
“Technical Education plays an important role in helping train the youths for jobs that are available in the field of technology,” Rio said.
His message which was read out by Minister for Higher and Technical Education, Temjen Imna Along during the inaugural session of the 4th Regional Workshop on Technical Education for the Directors and Principals of North Eastern States hosted by Department of Technical Education, Nagaland at Hotel Vivor here and supported by National Institute of Technical Teachers Training and Research (NITTTR) Kolkata on the theme “Challenges in Achieving Excellence through Accreditation in Polytechnics of North Eastern States”.
The Chief Minister also emphasized that the Technical Institution and Polytechnics in Nagaland and the Northeastern States, which have been set up years ago need to reinvent themselves and introduce courses which are in tune with the requirements of the modern society.
This, Rio said, requires continuous upgradation of facilities in the Technical Institutions as also training and reorientation of the faculties and teachers in the Technical Institutions.
“One way to ensure this is the accreditation of Polytechnics and Technical Institutions,” he said, adding that towards this objective, the regional workshop will go a long way in helping Polytechnics and Technical Institutions adapt to the best practices in the field of Technical Education.
Addressing the gathering from all the Northeastern states, Minister Along emphasized on the need to take technical education seriously saying that in the present global world the challenge is the survival of the fittest.
Reiterating that the new PDA government in Nagaland is serious with Chief Minister Neiphiu Rio setting the target of bringing some changes in some sector within 100 days, Along said, “We have stepped into the future believing in the change”.
Pointing that India holds more than 60% of the youngsters in the world, that are educated, thriving and willing to built not only our region but to show to the people that they are able.
“People of North East and the States can prove to the world by exporting talented people,” he said, while reminding that the future is not going to be a warfare of bombs and bullets alone but it is going to be a future where out economic, cultural and social strategies have to be put in place to fight the battle.
Expressing that youngsters have to be nation builders, the Minister was of the view that “if we are not able to train our people in our polytechnics in the right way to be able to compete among the nations, than somewhere something would going wrong”.
He urged upon the principals and directors attending the workshop to deliberate on infusing new blood into the youngsters, faculty and bring the change and give out nation builders to drive the country with skill, determination and boldness.
The Minister maintained that Northeasterners are humble and proud people and willing to be blessing to the country. Appealing the Union Ministry of Human Resource Development to deliver to the people of the North East, Along asserted, “We shall deliver unto the nation”.
He also urged the workshop to deliberate on the programmes laid in the polytechnics and contextualize the programmes in relevance to the region and availability of the students, resources, products and raw materials in order to make technical education a boon for the states of the region.
Workshop Coordinator from NITTR Kolkata, Prof. Samiran Mandal said In the recent past, the stakeholders of the Technical Education System are facing challenges in many fronts that include Quality Education, Employability, Accreditation and related issues.
The North Eastern Region comprising of 8 states has different demographic requirement, he said, adding that this requires special care for their development, especially in the area of Human Resource.
In this, he said, NITTTR Kolkata is conducting Regional Workshop on Technical Education System for North Eastern Region every year to address these issues as the platform where the various issues related to the Technical Education System faced by the states of North Eastern Region will be discussed so that necessary step can be taken to overcome these challenges.
He said the primary aim of this workshop is to study and analyze various issues faced by the Polytechnics of North Eastern States. It is a platform for the Principal of each Polytechnic and Director of Technical Education of each North Eastern State to provide their suggestions to NITTTR, Kolkata for the all-round development in the field of Technical Education System.
He said that the 4th Regional Workshop is being organized with an objective to analyze the challenges and explore possibilities for achieving excellence through accreditation in Polytechnics of North Eastern states.
He also said that it also aims to identify issues related to implementing accreditation in Polytechnics of North Eastern States and to suggest alternative pathways towards building excellence in Technical Education.
The workshop will conclude on April 9. (Page News Service)