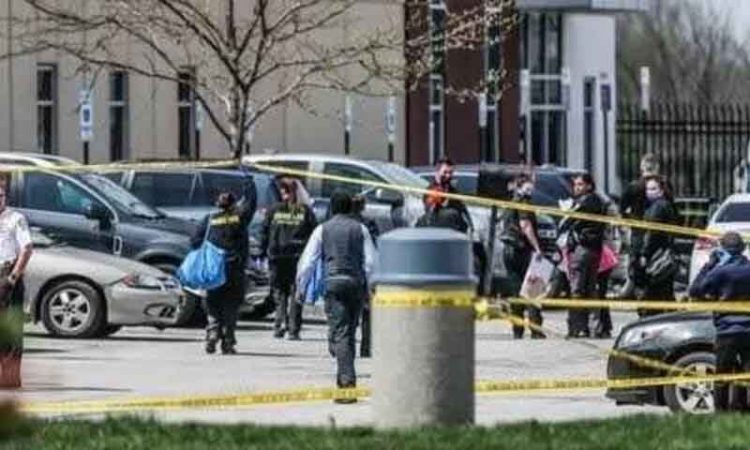 Washington, April 17: Four Sikhs, including three women, were among eight people who were killed in a mass shooting at a FedEx facility in the US state of Indiana staffed by a large number of Indian-American employees, shocking the community leaders who appealed to President Joe Biden to tackle the growing hate crimes and gun violence in the country.

The gunman, identified as 19-year-old Brandon Scott Hole, was a former employee. He allegedly died by suicide after the shooting on late Thursday night at the FedEx facility in Indianapolis. He was last employed by FedEx in 2020.
Hole was interviewed by FBI agents last year, after his mother called police to say that her son might commit suicide by cop”, the bureau said on Friday.
This is the worst Sikh massacre in the US after the Oak Creek Gurdwara mass shooting in Wisconsin on August 5, 2012, where seven members of the community were killed.
About 90 per cent of the workers at the FedEx delivery service facility are said to be Indian-Americans, mostly from the Sikh community.
“This is very heart-breaking. The Sikh community is devastated by this tragic incident,” community leader Gurinder Singh Khalsa told PTI over the phone after meeting family members of the employees of the FedEx facility.
The Marion County Coroner’s Office and Indianapolis Metropolitan Police Department (IMPD) released the names of the victims late on Friday.
Four victims who belong to the Sikh community are: Amarjeet Johal (66), Jaswinder Kaur (64), Amarjit Skhon (48) and Jaswinder Singh (68). The first three deceased are women. Other victims include Karli Smith, Alexander Matt, Samaria Blackwell and John White.
Another Sikh community member, Harpreet Singh Gill, 45, was hit by a bullet near the eye and is now in hospital.
The IMPD said the coroner’s office will determine the causes of death after autopsies are completed.
President Biden and Vice President Kamala Harris have expressed condolences over the tragic killings.
Vice President Harris and I have been briefed by our homeland security team on the mass shooting at a FedEx facility in Indianapolis, Indiana, where a lone gunman murdered eight people and wounded several more in the dark of night, Biden said in a statement.
Biden issued a proclamation in honour of the deceased. He ordered that the national flag be flown at half-staff at the White House and upon all federal buildings.
We have families in our country that are grieving the loss of their family members because of gun violence. There is no question that this violence must end. And we are thinking of the families that lost their loved ones, Vice President Harris told reporters.
“Deeply shocked by the shooting incident at FedEx facility in Indianapolis. Victims include persons of Indian American Sikh community. Our Consulate @IndiainChicago is in touch with the Mayor and local authorities in Indianapolis as well as the community leaders,” External Affairs Minister S Jaishankar said in a tweet.
“Will render all possible assistance,” he said in another tweet.
India’s Consul General in Chicago, Amit Kumar, spoke to the Mayor of Indianapolis Joe Hogsett, who assured full support.
We are closely monitoring the situation and remain ready to provide all possible assistance, the Indian Embassy said in a statement.
Khalsa said community members are in touch with the officials.
“Post 9/11, the Sikh community has suffered a lot. It is high time that strong measures be taken to bring an end to such mass shootings. Enough is enough,” he said. Indiana has about 10,000 members of the Sikh community.
Khalsa said: This should be a wake-up call for the entire country, in particular, the Sikhs and Asian Americans, against whom there has been a sudden spurt in hate crimes.”
We request the president of the United States that he needs to come forward and be serious about hate crimes, especially against the Sikh community because they are very vulnerable due to their appearance and look, he said.
The president should take it seriously — gun controls, automatic semi-automatic guns — they are very lethal, he said.
We are deeply saddened by this latest killing in Indianapolis. It is very troubling to hear random mass shootings taking place in America almost every week. This kind of senseless killing and gun violence needs to stop, Rajwant Singh, chairman of the Sikh Council on Religion and Education said.
I am heartbroken to confirm that my naniji (maternal grandmother), Amarjeet Kaur Johal, is among those killed in the senseless shooting at the FedEx facility in Indianapolis, said Komal Chohan.
We are still working to identify others who were injured and killed on Thursday night. I have several family members who work at the particular facility and are traumatised. My nani, my family, and our families should not feel unsafe at work, at their place of worship, or anywhere, she said.

“Our community has a long road of healing physically, mentally and spiritually to recover from this tragedy,” community leader Maninder Singh Walia told CNN.
Although Sikhs began settling in Indiana more than 50 years ago, the first gurdwara was established in 1999. Today, there are 10 gurdwaras across the state and an estimated 8,000 to 10,000 Sikh Americans who have made Indiana their home.
I am deeply shocked and saddened by the loss of eight FedEx employees following the tragic shooting at FedEx Ground facility in Indianapolis. This FedEx facility was staffed by a large number of Asian Indian Sikh employees. I am saddened to know that at least four of those killed are members of the Indianapolis Sikh community, said Democratic Party leader Ajay Jain Bhutoria. (PTI)