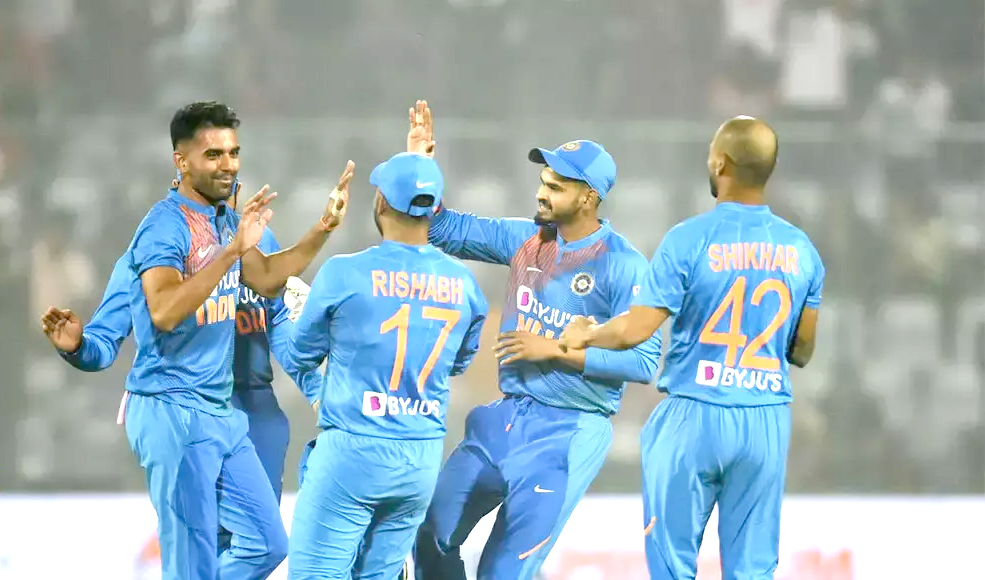 NAGPUR, November 10: Pacer Deepak Chahar took a sensational six-wicket haul, including a hat-trick after entertaining half-centuries from Shreyas Iyer and K L Rahul, as India defeated a self-destructing Bangladesh by 30 runs in the third and final T20 International to win the series 2-1, here on Sunday.
Pacers Deepak Chahar (6/7 in 3.2 overs), who registered the best figures in a T20I match on Sunday besides becoming the first Indian to take a hat-trick in the shortest format, and Shivam Dube (3/30) shared nine wickets amongst themselves to secure India’s first T20I series win at home this season.
Heavy late evening dew rendered the spinners ineffective but Chahar and Dube rose to the occasion.
Iyer (62 off 33) and Rahul (52 off 35) had earlier smashed sublime half-centuries to propel India to 174 for five after Bangladesh opted to field. Chasing the target, the visitors were all out for 144 in 19.2 overs.
With 50 needing off the last 30 balls and six wickets in hand, Bangladesh had a great opportunity to win the series but they crumbled under pressure.
Rookie opener Mohammad Naim (81 of 48) played a blinder to take Bangladesh deep into the game before they lost five wickets for 20 runs to blow it all away.
Chasing a challenging 175, Bangladesh suffered early setbacks as Chahar had opener Liton Das and Soumya Sarkar caught off successive balls to leave the visitors at 12 for two.
Naim, playing his debut series, and Mohammad Mithun (27) shared a 98-run stand for the third wicket to bring their team back into the contest.
Left-hander Naim played some exquisite strokes especially against the spinners and welcomed Yuzvendra Chahal into the attack with three consecutive fours.
Earlier, a maiden half-century for Iyer and the sixth one for Rahul helped India put up a competitive total. Iyer’s cracking knock came after he was dropped on 0.
Bangladesh skipper Mahmudullah followed the template set in the series by winning the toss and opting to field.
India made an unexpected call by dropping a bowler in Krunal Pandya for middle-order batsman Manish Pandey.
The hosts were dealt a body blow in the second over when pacer Shafiul Islam removed their skipper Rohit Sharma, who had made a sublime 85 in the serieslevelling win in Rajkot. Rohit tried to whip a length ball but only managed an inside edge on to the stumps.
Rahul joined Shikhar Dhawan (19 off 16)in the middle and with both the batsmen under pressure having not made an impact the first two games, the situation provided them an ideal platform to deliver.
Dhawan, who has found it tough to accelerate of late, got going with successive boundaries off Al-Amin Hussain. Rahul too began his innings in a similar fashion, going for the aerial straight drive before punching Islam through point.
However, Dhawan could not last long after hitting four boundaries, mistiming a slog to be caught in the deep by Mahmudullah.
India once again could not get to a good start batting first, struggling to 41 for two in six overs. It would have been three down at that stage if Aminul Islam had not dropped a regulation catch off incoming batsman Iyer at backward point.
Rahul and Iyer gave a much needed boost to the Indian innings with a 59-run stand.
Rahul in full flow is always a treat to the eye and that is what the Nagpur crowd witnessed. He completed his fifty off 33 balls before getting caught at mid-off two balls later, leaving India at 94 for three in the 13th over.
Iyer, who made a sedate start to his innings, went ballistic after Rahul’s departure. He was especially brutal against the spinners and hit three sixes over long-on off Afif Hossain.
Iyer, who raced to his 50 off 27 balls, ended up hammering five sixes and three boundaries.
Rishabh Pant (6), who has copped a lot of criticism of late both for his batting and wicket-keeping, disappointed once again when the team needed him to provide the big hits. He struggled in his nine-ball stay and was eventually bowled after being deceived by a slower one from medium pacer Soumya Sarkar.
Pandey (22 not out off 13), playing his first game of the series, came up with welcome boundaries in the death overs to take the total beyond 170. (PTI)