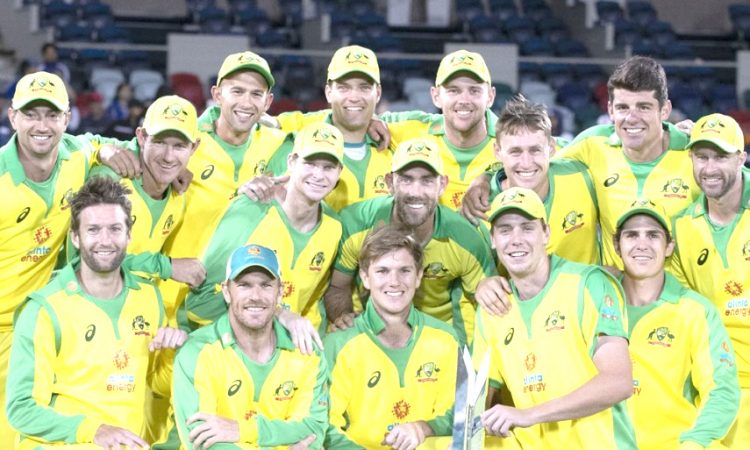 The Australian team pose for a photo with their trophy after winning the one day series against India 2-1 following the final match at Manuka Oval, Canberra, Australia, Wednesday, Dec 2, 2020. (AP)

CANBERRA, December 2: Pace spearhead Jasprit Bumrah found his mojo and the Indian team its winning ways in a morale-lifting 13-run triumph over Australia in the third and final ODI on Wednesday, salvaging some of the lost pride in a 1-2 series defeat.
An in-form Hardik Pandya blasted 92 not out off 76 balls and Ravindra Jadeja’s useful 66 off 50 took India to a healthy 302 for 5 in 50 overs after an inept show in the first 30 overs.
It was at least 30 runs short of a par-score on a good batting track but a rejigged bowling attack managed to restrict the home team to 289 all out in 49.3 overs.
Shardul Thakur (3/51) and debutant Thangarasu Natarajan (2/70 in 10 overs) did their bit but it was Bumrah’s (2/43 in 9.3 overs) controlled effort with some swing upfront and the dismissal of a marauding Glenn Maxwell in the nick of time which ultimately turned the match in India’s favour.
Bumrah did the most important thing by bowling one in the block-hole that had the dangerous Maxwell (59 off 38 balls) having his own little “brain fade” moment trying to free his arms exposing the stumps.
The ‘Big Show’ was in a mood to punish the bowlers and all he needed was to see off Bumrah and attack the others as he was doing.
The cushion provided by his “senior” helped Natarajan to start bowling his yorkers under pressure and Thakur also chipped in with necessary wickets.
The inconsequential match became something of consequence for Virat Kohli and his men as they gear up for the next white-ball series — three T20 Internationals in less than 48 hours.
India’s bowling attack had a different look and it did perform way better compared to the first two games.
Natarajan was very steady in his first spell and got his maiden wicket when Marnus Labuschagne (7), in an unfamiliar role as opener, dragged a wide delivery back onto the stumps.
Thakur, replacing a rested Mohammed Shami, was also lucky when Steve Smith (7) tried to tickle one down on the ‘fifth leg stump’ to be caught by KL Rahul behind the stumps.
Moises Henriques (22) and skipper Aaron Finch (75) looked good during their 51-run stand for the third wicket before the former failed to keep a pull-shot down off Thakur’s bowling.
However, what was more heartening was Kuldeep Yadav’s (1/57 in 10 overs) restrained bowling in the middle overs with the last over punishment by Maxwell being more of an aberration.
The flight was back and so was the dip in the air that used to create confusion in the minds of batsmen.
Debutant Cameron Green (21) played an uppish slog sweep off Kuldeep which was snapped inches off the ground by Jadeja.
Jadeja (1/62 in 10 overs), who had a field day, topped up a solid batting show with the prized wicket of the rival captain Finch as Shikhar Dhawan managed to make an easy catch look difficult at long-on.
Maxwell and the calm Alex Carey (38 off 42 balls) looked like doing an encore of their victorious effort against England at Old Trafford last September.
But just when they settled down, Carey went for a non-existent single only to be sent back by Maxwell as Australia were reduced to 210 for 6.
Earlier, an in-form Pandya and the effective Jadeja helped India make an impressive recovery after the team struggled during the first 30 overs with only skipper Kohli’s fighting half century being the bright spot.
Coming together in the 32nd over, Pandya and Jadeja stitched 150 runs for the unbroken sixth wicket to change the complexion of the game, which would make no difference to the final score-line as Australia have already sealed it with back-to-back wins in Sydney.
It looked like India would barely reach 250 but Pandya and Jadeja made it a different story.
The duo took some time to settle down before opening the floodgates of boundaries. They scored 53 runs from the 46th to 48th over. In all, 76 runs came from the last five overs.
Pandya’s innings had seven fours and one six while Jadeja was at his best, hitting five boundaries and three sixes.
Virat Kohli ends 2020 without an ODI century, a first since 2008
India skipper Virat Kohli has over the years proved beyond doubt that he is one of the best in the business across formats. But the Covid-stricken 2020, which brought the sport to a halt for nearly six months, is now the first year since Kohli’s debut in 2008 that he has failed to score a century in ODIs.
Kohli ended 2020 without a hundred as he was dismissed for 63 in the third ODI against Australia on Wednesday. That left Kohli with a highest individual ODI score of 89 this year. In fact, he scored 89 twice this year, both times against Australia, including in the second ODI of the series during the ongoing tour Down Under.
However, Kohli played just nine ODI matches this year due to the coronavirus pandemic. Before this tour, the last ODI that India had played was in February during their tour of New Zealand.
While he would definitely be disappointed on missing out on a century, Kohli became the fastest batsman to score 12,000 ODI runs. He achieved the feat during the third ODI in Canberra, taking only 242 innings to touch the landmark figure. Also, the captain is just the sixth player to reach the milestone.
“12,000 ODI runs for Virat Kohli. He has become the fastest batsman to reach the milestone, in just 242 innings,” the International Cricket Council had tweeted.
Kohli broke the record that was earlier in the name of batting legend Sachin Tendulkar, who took 300 innings to score 12,000 runs in ODI cricket. (PTI/ANI)