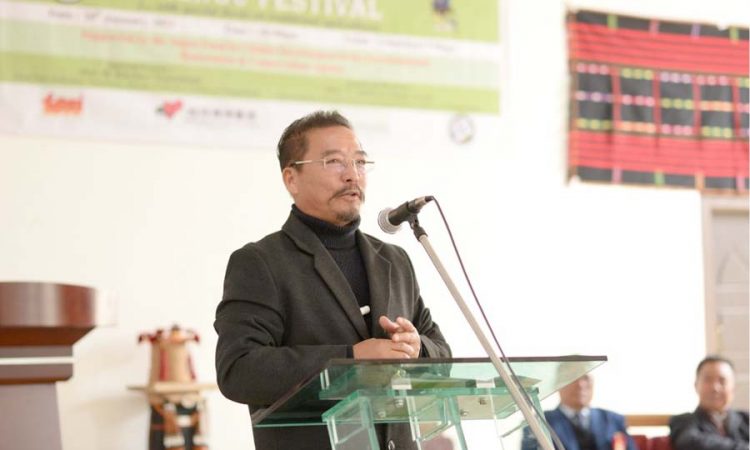 DIMAPUR, JANUARY 20: The third edition of Chengu festival organised by the Tizu valley biodiversity conservation and livelihood network (TVBVLN) and supported by Japan fund for global environment of the environmental restoration and conservation agency was celebrated at Ghukhuyi village on January 18 with Advisor for Tourism and Art and Culture, H Khehovi Yeputhomi as special guest and Agriculture Production Commissioner, Y Kikheto Sema as guest of honour.

The celebration was held on the theme ‘with special focus on traditional agriculture’.
Speaking on the occasion, Yeputhomi said that God’s greatest gift to human is nature and its resources, and despite being a small state, Nagaland has many beautiful landscapes and rich culture and traditions.
He urged everyone to preserve one’s natural resources and do away with hunting and destruction of natural resources.
Yeputhomi encouraged the people to make good use of the various schemes and projects that the central government and state government have been giving to help the poor and needy in rural areas.
He also requested the people, especially elders, to teach the young people various folk songs, folklores, folk dance and teach them to preserve one’s traditional dresses and ornaments so that they too can teach their children, thereby preserving the rich culture and traditions.
On the occasion, he also released one Chengu bird ‘which was rescued from hunters’.
Y Kikheto Sema also stressed on conserving natural resources, protecting wildlife and promoting biodiversity by prohibiting hunting, logging, mining etc.
He urged the villagers to practice self-cultivation and come forward to the department, i.e Agriculture or Forest, if they have any doubts regarding the use of pesticides or any artificial means of cultivation so that the soil is conserved and harvest is organic, rich and in abundance.
He added that with modernization and changing Naga society, the traditional shifting cultivation or jhum cultivation is currently in transition and hence it becomes imperative to understand the role of shifting cultivation for sustainable development in present context.
Deputy Commissioner of Zunheboto Peter Lichamo, his short speech, appreciated the GBs, elders and all the citizens of the three villages i.e Kivikhu, Sukhai and Ghukhuyi for making the Chengu festival happen and also requested them to do even more better and be an example to other villagers so that they would join them in preserving the wild animals and natural resources.
(Page News Service)