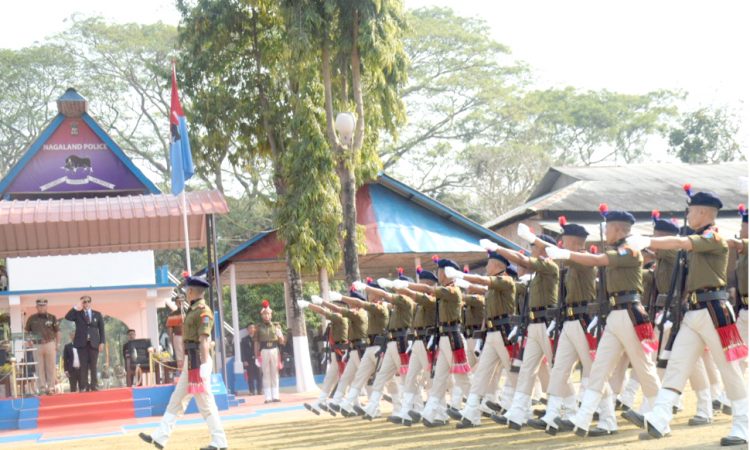 Dimapur, February 16: Nagaland Chief Minister Neiphiu Rio today announced that his Government would sanction 15% extra allowance to the basic pay of the 390 recruit Constables, who passed out from the 65th Batch of Basic Training and instructors allowance to all the sanctioned staff posted in the training centres.
Speaking at the Passing Out Parade of the 65th Batch of Basic training of 390 recruit Constables of DEF/PHQ/INT/NPTO & 15th NAP (IR) Mahila Battalion, Rio said he has informed the DGP and all senior officers that the training courses must be equal to or better than the training centres in other states. He also urged upon all officers and jawans to improve on all aspects of training and assured that his Government would always be supportive and ensure the welfare of the jawans to the best of our ability.
Appreciating the new recruit Constables, the Chief Minister said to attain the standards demanded by Nagaland Police Training School is a fantastic achievement. He expressed happiness that during 9 months training, they are not only doing physical training endurance, drill with and without arms, battle craft, field craft and tactics as well as indoor subjects of law and most importantly human rights and ethical values.
However, he said completion of this training in just the beginning as ahead of them lies years of service to the people of the state and elsewhere.
Hoping that they would perform with traditional flair and selfless devotion to duty of the Nagaland Police, Rio appealed to all Nagaland police personnel passing out today to always remember their motto-Security, Service and Sacrifice and contribute to the Naga society by maintaining law and order and providing safety and security to all the citizens of Nagaland.
He also expressed happiness to note that a good number of education personnel are joining the police force. In today’s world when the nature of crime is also changing with economic offenses and cybercrime, it is essential that the skills and expertise of our police personnel is upgraded to meet the challenges of modern times, he said.
He also commended that there are 38 Mahila recruits in the batch, adding Nagaland police boys and mahila jawans have earned laurels wherever they have been deployed for law and order duties.
“As a police person, one must remember that he stands out only because of his disciplined life style and well turned out uniform. Nagas are also known as a martial race and we expect high of you to be smart, disciplined, dedicated in the service of our State and the nation,” he stated.
Earlier, presenting a brief report on the 65th batch recruit constables, Principal NPTS said that for the batch basic course, a total number of 402 recruit constables reported to Nagaland Police Training School, however 12 personnel were released and sent back to their parent unit on various grounds.
He disclosed that 390 personnel have successfully completed their training and have taken oath to serve the state and nation with Nagaland Police motto of “Security, Service and Sacrifice”. (Page News Service)