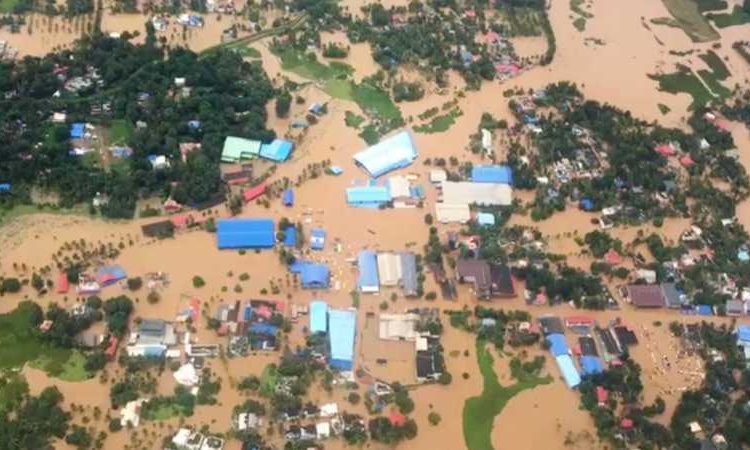 Thiruvananthapuram, August 17: The death toll in Kerala in the current spell of heavy rains climbed to 174, and to 324 overall this monsoon season, chief minister Pinarayi Vijayan said on Friday, as the ‘grave’ situation triggered by the state’s worst floods in a century left thousands homeless, destroyed crops, and disrupted air, rail and road traffic for a week.
While rain has abated and will lessen in the next 24 hours till Saturday, the relief could be short-lived as the ‘vigorous’ southwest monsoon over Kerala will bring in more heavy spells during the weekend in the state, besides Tamil Nadu and Karnataka, the regional weather office said.
Heavy rains are forecast for isolated places over north Kerala, coastal Karnataka and its south interior parts on August 19. However, the red alert has been withdrawn from two districts of Thiruvananthapuram and Kasargode out of the state’s 14, according to officials.
“Kerala is facing its worst flood in 100 years. 80 dams opened, 324 lives lost and 223139 people are in about 1500+ relief camps. Your help can rebuild the
lives of the affected,” chief minister Pinarayi Vijayan said in a tweet, citing the overall toll this monsoon season.
Officials said four people have died in Thrissur and three bodies were recovered in Pathanamthitta, which are yet to be identified. Seven went missing after a parish hall collapsed in north Paravur trapping several others, they added.
A pregnant woman who developed labour pains was safely airlifted by the Air Force from an Aluva village and gave birth to a baby boy in a hospital she was taken to. Both twenty-five-year-old Sajita Jabeel and the newborn are safe.
Prime Minister Narendra Modi will reach Kerala later in the day and start an aerial survey of the state on Saturday morning. “Had telephone conversation with Kerala chief minister P Vijayan just now.We discussed the flood situation across the state and reviewed rescue operaations. Later this evening, I’ll be heading to Kerala to take stock of the unfortunate situation due to flooding,” Modi tweeted.
Vijayan said the situation was serious but was optimistic of overcoming as most of the state remained under water amid continuous rain, landslides and floods. He said over two lakh people have been shifted to 1,568 camps across the state but many are still stranded.
“All marooned people will be saved by this evening. I am confident we can achieve this. The Centre is responding well,” Vijayan said at a press conference.
“Sixteen army teams, 28 navy teams, 39 NDRF (National Disaster Response Force) teams are involved in the relief and rescue operations. NDRF has so far rescued 4,000 people,” he said.
An NDRF spokesman in New Delhi said the force has moved more than 4,319 people to safer places and rescued another 44 from flooded areas in Kerala in the past nine days, while its 51 teams, out of the total 53 deployed, are operating on the ground and two more will reach Kerala soon.
The Army said it has a total of 10 flood relief columns, 10 Engineer Task Force, 53 BAUTs are in rescue and relief operations. Two additional special teams will be joining soon.
Vijayan also sought to allay fears after rumours that the century-old Mullaperiyar dam had developed cracks and warned action against rumour-mongers.
“There is no threat to any dam,” he said.
The relief and rescue teams of the Air Force and Army on Friday started distributing food packets among those who have been marooned in several flood-hit areas of the state as more boats and helicopters were pressed into service. The Indian Coast Guard is involved in rescue operations in 28 places in the state.(Courtesy: HT)