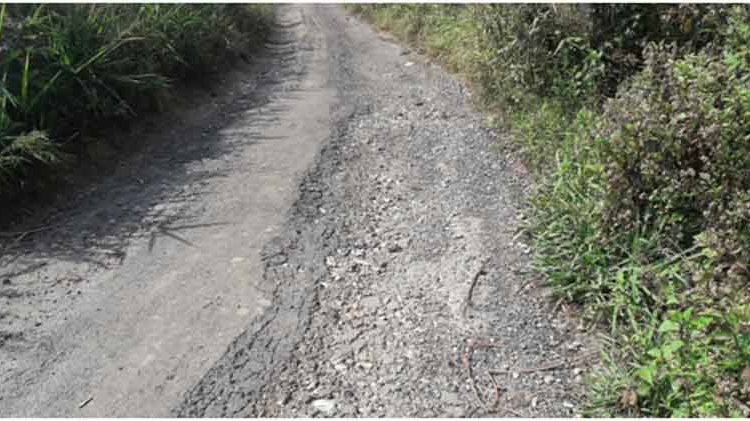 Dimapur, May 3: Three student bodies have alleged negligence in the construction of Pradhan Mantri Gram Sadak Yojana (PMGSY) road of Mimi to Khongka and Hakumuti under Pungro Sub-Division of Kiphire (Asiprational) district).

Quoting an RTI report and DPR, the Khongka Students Union; Betang Students Union and Hakkomute Students Union stated that the 42 km road amounting to Rs 156829000 was sanctioned and the work was assigned to Hexad Syndicate (Thepfusatuo Rio) and the agreement between the contractor and Chief Engineer PWD (R&B) and the Empowered Officer PMGSY, NGRRDA Nagaland was signed on April 9, 2012, where the contractor has agreed to complete the entire project within the stipulated time.
In a joint press release, the student bodies stated that according to DPR the road which is supposed to be 42 km, has only 29 km on ground cutting short by 13 kms.
The unions said they have also appealed to the Department for a spot verification on September 12, 2019, which is not verified till date. They said despite receiving an assurance from the Chief Engineer, PWD (R&B) for resuming the work at the earliest, and completion by December 2019, the work has not resumed till date.
Stating that the work order was issued in 2012, the PMGSY Road has remained neglected, the Union said the representative of Khongka, Betang and Hakkomute village students’ body had expressed strong resentment against the Contractor and Department for not resuming the pending PMGSY Road Project between Mimi to Khongka via Hakkomute Village under Pungro Sub-Division of Kiphire District.
Citing an RTI report, they stated that the Bill has been release for 72%, whereas the actual work executed or blacktopping is approximately 3 km to 4 km only out of 42 kms, which is also of the cheapest quality.
“The mention is also made for everyone’s knowledge that on our visit to the office of Executive Engineer PMGSY at Kohima on 17th July 2019, The then Executive Engineer PMGSY sadly stated that there is no need of constructing a good road at the eastern most part of the state, which as an officer is soo unbecoming and questionable, this is the clear sign of ill treatment towards Eastern Naga, the question therefore arises to the department and the concerned officer, which part of the state deserves good road? Give us the reason why we don’t deserve the good roads?,” the joint press release issued by Thrunso, president, Khongka Students’ Union, Jonah, president, Betang Students Union and Silenthong, president, Hakkomute Students Union.

The Unions also sought clarification from the concerned department whether 11 years is not enough to complete the project of 42 kms and said that on failure to respond at the stipulated time, it would take the matter to the highest level.
(Page News Service)