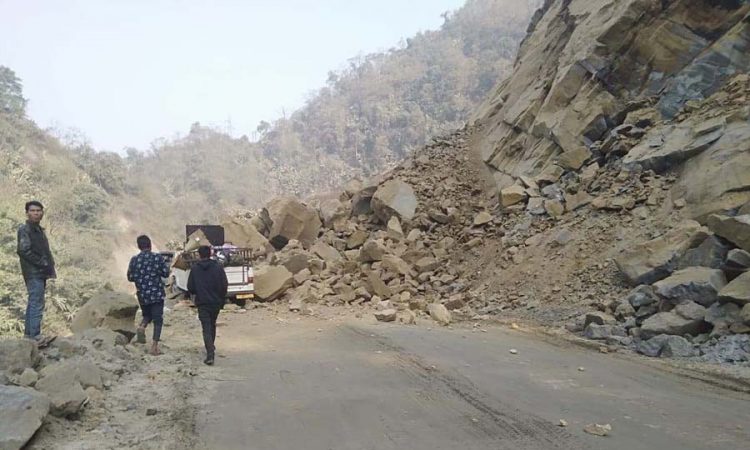 Dimapur, February 2: Three persons, including a woman were injured and four vehicles damaged on Tuesday in a rockslide on National Highway-29 near New Chumukedima village.

According to police, the incident occurred when rockslide occurred at the site where four-laning works are in progress.
PRO Dimapur Police, Relo T Aye said that the injured were shifted to hospital and are stated to be stable. He also informed that the vehicles damaged during the rockslide include one WagonR, Gypsy, Bolero and Bolero Pick-up.
Meanwhile, Dimapur district administration has closed the road from Patkai bridge to Kukidlong as a precautionary measure.
In a Circular, DC Dimapur, Rajesh Soundararajan stated that in view of heavy rockslides between Chumukedima Police Check Post till New Chumukedima village, the road from Chathe River Bridge (Patkai bridge) to Kukidolong has been closed with immediate effect till further order.
Total restriction of all movement is necessitated as a precautionary measure to prevent any injury, loss of life and damage of property, the DC stated.
Meanwhile, general public have been advised to take alternative route from Dimapur-Kohima/Kohima-Dimapur for light vehicles only via 7th Mile-New DC Office-Shokhuvi-Razaphe-Mhaikam-Pimla-Mhainamtsi-Jhornapani/Medziphema and vice versa.
It may be mentioned that there have been number of rockslides between Patkai Bridge and Kukidolong on Dimapur-Kohima stretch of NH-29 due to four-laning works for the past few months. (Page News Service)