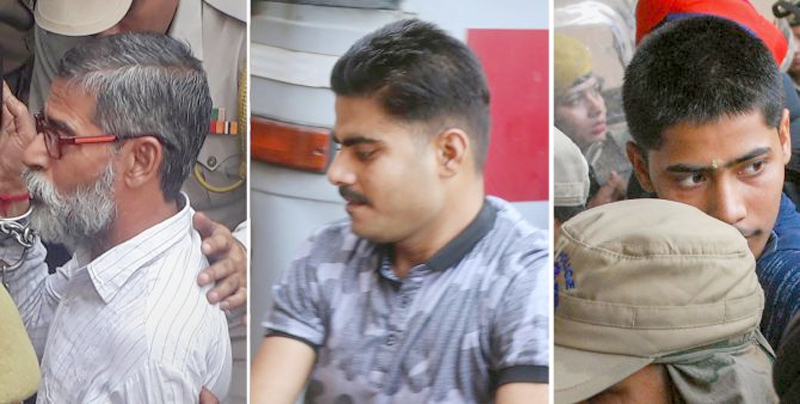 New Delhi, June 10: Three men convicted for gang-rape and murder of an eight-year-old in Kathua were on Monday sentenced to life in jail. A Pathankot court, which had convicted six people a few hours earlier, sentenced three others to five years for destroying evidence to shield the rapists.
Sanji Ram, a retired revenue department official, Deepak Khajuria, a special police officer and Parvesh Kumar have been spared the death penalty that prosecutors had asked for and ruled that they would spend their life behind bars. Parvesh Kumar is the friend of the eighth accused named by Jammu and Kashmir’s Crime Branch for kidnapping the girl and her gang-rape.
Police officials Tilak Raj, Anand Dutta and Surender Verma have been sentenced to five years under section 201 of the Ranbir Penal Code (as Jammu and Kashmir’s penal code is known) for destruction of evidence.
A seventh accused, Vishal – son of main accused Sanji Ram – was acquitted by the court, giving him the ‘benefit of doubt’, said Farooqi Khan, who represented the victim’s family in the court.
The eighth accused, reported to be a juvenile, was not put on trial because the high court is yet to rule on a petition about his age.
The horrific rape, which had polarised the state socially, politically and on communal lines, had brought the BJP-PDP coalition close to a breaking point when several BJP leaders demanded a CBI probe after the accused were arrested by the crime branch.
Two BJP ministers in the erstwhile Mehbooba Mufti government – Chandra Prakash Ganga and Lal Singh – also had to quit for their open support to the accused.
Former chief ministers Mehbooba Mufti and Omar Abdullah have welcomed the convictions on Monday and took a hard swipe at BJP leaders who backed the effort to run down the police probe.
Abdullah, without naming the BJP, said no words of condemnation are enough to those politicians who defended the accused and vilified the victim. Mehbooba Mufti said: “High time we stop playing politics over a heinous crime where an 8 year old child was drugged, raped repeatedly & then bludgeoned to death.”
Sanji Ram, a retired revenue department official, was the key plotter. According to the police, he wanted to drive the nomadic Bakarwal community from his native Rasana village and incited his nephew to abduct the girl. His son, Vishal, has been acquitted.
The girl, kidnapped as part of a strategy to drive out the minority nomadic community from the area in January 2018, had been overdosed with a cocktail of sedatives through her captivity and raped repeatedly. Four days later, she was strangled and then bludgeoned with a stone to make sure she was dead.
The trial was shifted out of Jammu and Kashmir to a special court in Punjab’s Pathankot on the orders of the Supreme Court. The girl’s parents had approached the top court to get the case transferred out of the state because they feared for the lives of the family, friends and witnesses.
On February 14 last year, a group called Hindu Ekta Manch, carried out a rally with tricolour in their hands allegedly in favour of the accused seeking their release. Then chief minister Mehbooba Mufti had said she was ‘horrified’ by the use of the national flag in such demonstrations, which was nothing short of desecration.
A total of 114 witnesses were examined during the trial. A total of four witnesses are said to have been declared hostile during the trial. After the Kathua case, J&K Government had brought in an ordinance providing death penalty for rape of children below 12.
The court in Pathankot was turned into a fortress on Monday, as a large number of security personnel and riot control vehicles were deployed ahead of the verdict in the gruesome rape and murder case.
The trial of a juvenile is yet to begin, as the petition on his age is yet to be heard by the Jammu and Kashmir High Court.
The Crime Branch has arrested village head Sanji Ram, his son Vishal, juvenile nephew and his friend Anand Dutta, and two special police officers Deepak Khajuria and Surender Verma.
Head Constable, Tilak Raj and Sub-Inspector Anand Dutta, who allegedly took Rs 4 lakh from Sanji Ram and destroyed crucial evidence, were also arrested by the Crime Branch.
All of them, except the juvenile, are currently lodged in Gurdaspur jail in Punjab.
Two first information reports (FIRs) were filed in connection with this case. One against eight accused of allegedly being involved in the crime, and another against a group of lawyers, who had allegedly stopped the police from filing the charge sheet against the eight accused in this matter. (Agencies)