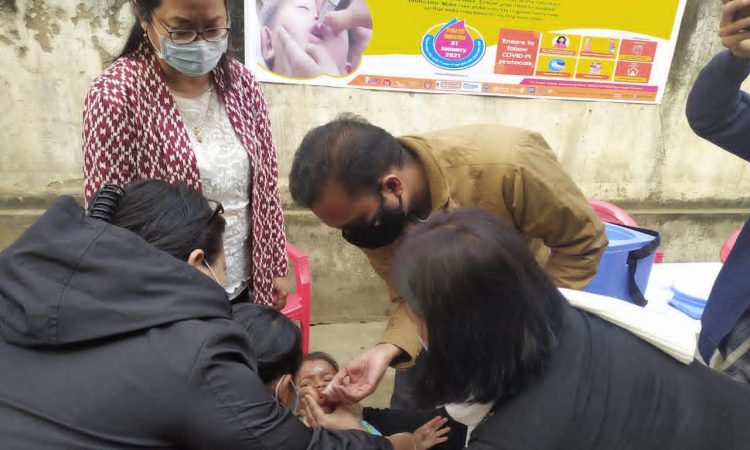 DIMAPUR, JANUARY 31: With the target of covering more than 1.5 lakh children, Nagaland began its first round of the 3-day nationwide Intensive Pulse Polio Immunization (IPPI) on Sunday.

In Dimapur, the first two drops of polio was administered by Rajesh Soundararajan, IAS, Deputy Commissioner Dimapur during a brief launching programme held at CMO’s Office Dimapur.
Today, 519 booths across the district were set up to administer two drop of polio to 43355 children between the ages of 0-5 years in the district.
House to house polio vaccination will also be carried out the rest of the week to immunize children who were missed today.
Dr. Rebecca, District Programme Officer, RCH/UIP stated that although India has been declared “polio free” since 2014 and the last case of polio was recorded in 2011, the Government of India continues to launch Polio Program to maintain the polio eradication from the country as few neighbouring countries are yet to eradicate polio. Thus, India continues a strict polio surveillance system to maintain its ‘polio-free’ status.
She further stated that IPPI Sunday have been successfully carried out in the district in the past years due to the co-ordination and support of communities, allied departments, NGOs and the local authorities. She hoped that the joint efforts will continue in the years to come and such co-operation will also continue to be extended to other health programmes as well.
Other officials present during the programme include Dr. Mereninla Senlem, CMO Dimapur, Dr. Antoly Suu, Dy.CMO, Dr. Benchilo, DTO, Dr. Heto, ZLO, Dr. Kheshika, Dr. Sendongyanger, MO (AYUSH), Shri. Rajesh Monsang, PO, UNDP, and staffs under CMO office and MS office establishments. The programme was chaired by Dr. Rebecca, DPO and a dedication prayer was delivered by Rev. Yhunlo Thong, Chaplain, DHD.
In Zunheboto, Hito Sema, Additional Deputy Commissioner, administered the first drop at CMO office while Dr M Nukshisangla Jamir, DPO (RCH & UIP), gave the keynote address.
The district is targeting 8495 children between the age of 0 and 5. It has 233 booths.
In Tuensang, Deputy Chief Medical Officer, Dr G Viholi Sema launched the programme by administering two drops of Pulse Polio to a child at clock tower junction.
According to Dr Thungchanpani Patton, DPO, UIP & RCH, 242 Polio booths have been set up across the district to cover 13,385 targeted children in the age group of 0 to 5 years.
The team members will continue the activity for two more days through house-to-house approach.
In Peren, Dr Kiholi Assumi, DPO UIP/RCH, administered the first polio drop at CHC Jalukie. Under the supervision of twenty-two team members, the operation was conducted successfully.
Altogether, there are 552 volunteers, 138 booths, 22 supervisors involved in carrying out the tasks in the District.

With the motive to reach out to every household, teams involving health workers, Anganwadi workers, ASHAs of every village, were divided and sent to every part of the district ensuring that no child is missed out covering Samzuiram, Lilen, Phaijol, Phangjang, Jalukieram villages under Jalukie block and Ngualong and Bamsai villages under Tening Block.
The house-to-house visits will continue till February 2.
(Page News Service)