3 arrested on charges of kidnapping for ransom 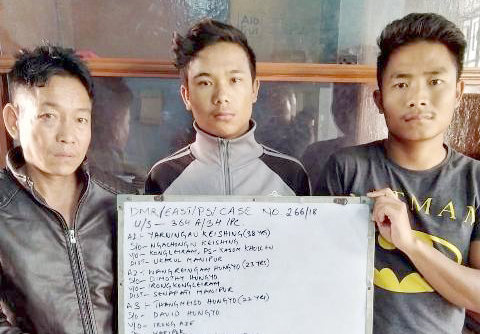 Dimapur, November 20: Dimapur Police arrested three persons on charges of kidnapping a person for ransom.
The three accused, all hailing from Manipur, have been identified as Yaruingau Keishing (38), son of Ngachongiu Keishing, Wangreingam Hungyo (23), son of Dimothy Hungyo and Thangmeiso Hungyo (22), son of David Hungyo.
Based on a complaint on November 18 that a non local person (name withheld) was kidnapped and that the some unknown miscreants were demanding a ransom of Rs 10 lakhs for his release, a special police team successfully located and rescued the victim from a hotel in Dimapur town.
During the police operation, one of the accused Wangreingam was nabbed from the hotel room where the victim was illegally confined. Subsequently the mastermind, Yaruingau along with his accomplice, Thangmeiso were arrested from a different location within Dimapur town.
Initial police interrogation revealed that the kidnappers had relocated the victim in different hotels to avoid police vigilance.
The arrest was affected promptly before any ransom could be made.
Three mobile phones and four active SIM cards were also seized from the arrested persons.
In this connection a case has been registered in East PS under relevant sections of IPC for further investigation. (Page News Service)