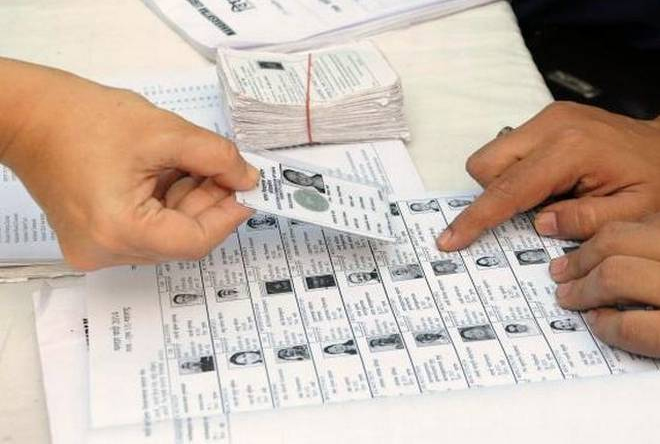 New Delhi, April 18: Marred by sporadic incidents of violence in West Bengal and Manipur, the second phase of the Lok Sabha elections 2019 held on April 18 was by and large peaceful in 95 parliamentary constituencies across 11 states and 1 Union Territory, the Election Commission said at the conclusion of polls.
Most states witnessed moderate to high voter turnout with Puducherry clocking the highest at 73.3%. The voter turnout was 67.84% overall as compared to about 69.6% in 2014. In Karnataka, voter turnout was 61.8%, in Assam 73%, in Jammu and Kashmir 43.3%, in Uttar Pradesh 58.6%, in Bihar 56.2% and in Maharashtra 57.2%.
“We are happy to announce that voters turned up in large numbers in the second phase of polling and there were no incidents of poll boycott in this phase in most of the states. We would also like to especially thank the large number of poll volunteers who helped people with disabilities to cast their vote,” an Election Commission spokesperson said.
Members of the Election Commission also mentioned the Central paramilitary forces manning the critical polling booths in Chattisgarh, Manipur and Jammu and Kashmir.
The Lok Sabha elections 2019 are being held in seven phases. In Phase 2, 1,629 candidates from various political parties are in the fray. Polling was held in 1.76 lakh booths across the country. In the second phase of polling held on Thursday, a total electorate of 15.8 crore cast their votes. There were 7.8 crore women voters indicating the rising participation of women in the electoral process. People with disabilities added up to 8.45 lakh, the EC said.
After reports of EVMs malfunctioning in some seats came in, the Election Commission replaced 0.37% of ballot units and 1.45% VVPATs till the end of the day’s polling.
Elections for the 18 assembly segments where bypolls are being held saw a voter turnout of 55.97% till 5 pm. (Agencies)