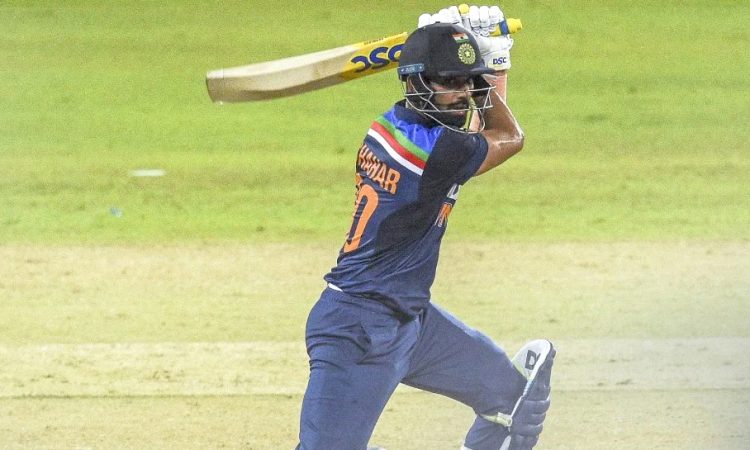 Colombo, July 20: Indian paceman Deepak Chahar conjured up a brilliant maiden ODI fifty to power Team India to a 2-0 ODI series win over hosts Sri Lanka on Tuesday (July 20). Chahar smashed an unbeaten 69 off 82 balls to lift India from a near hopeless position in the second ODI, chasing 276 to win. The Chennai Super Kings speedster put on 84 runs for the eighth wicket with vice-captain Bhuvneshwar Kumar (19 not out) to power India to an unlikely three-wicket victory with five balls to spare.

The win, India’s second in a row over the hosts, meant that Dhawan’s side had recorded 93 wins over Sri Lanka in their ODI history – the most by any nation against one particular opposition. India had slipped to 193/7 with Krunal Pandya (35) getting bamboozled by Wanindu Hasaranga and it seemed then that Sri Lanka would level the series at 1-1. But brilliant back-to-the-walls performance by Chahar and Bhuvneshwar meant India sealed a series win for first-time ODI skipper Dhawan and coach Rahul Dravid.
Before Chahar’s heroics, Suryakumar Yadav had also notched up a maiden ODI fifty in only his second ODI. Yadav completed his fifty off only 42 balls before getting trapped leg-before by chinaman bowler Lakshan Sandakan for 53.
Earlier, leg-spinner Yuzvendra Chahal led India’s decent effort with the ball as a self-destructing Sri Lanka slipped to 275 for nine in the second ODI in Colombo. Pretty much like the series opener, most of the Sri Lankan batsmen got starts but failed to capitalise after the hosts opted to bat.
Avishka Fernando (50 off 71) and Charith Asalanka (65 off 68) struck fine half-centuries but the home team wasn’t disciplined enough to post an imposing total. Chamika Karunaratne (44 not out off 33) came up with another timely cameo to take the team past 270.
Chahal (3/50) was the pick of the bowlers while pacers Deepak Chahar (2/53) and Bhuvneshwar Kumar (3/54) too got wickets primarily due to profligacy of the home team batsmen.
Openers Fernando (50 off 71) and Minod Bhanuka (36 off 42) took Sri Lanka to 59 for loss in the first 10 overs. The momentum shifted India’s way drastically after Chahal removed Minod and Bhanuka Rajapaksa off successive balls in the 14th over. In Minod’s case, it was a soft dismissal as the well set southpaw charged down the wicket and flicked an eventual full toss straight to Manish Pandey at mid-wicket.
The next one from Chahal was a beauty which held its line to a take faint outside edge of Rajapaksa’s bat and wicketkeeper Ishan Kishan managed to clutch onto the catch. Sri Lanka, who are among the worst performing teams in the middle overs, struggled again in the crucial stage of the game. They took 97 balls to take find their next boundary after the eight over.

From 77 for no loss in the 14th over, Sri Lanka slipped to 134 for four in the 28th over.
Asalanka and skipper Dasun Shanaka tried to resurrect the innings but their 38-run stand ended with the captain falling to a flatter one from Chahal. (Agencies)