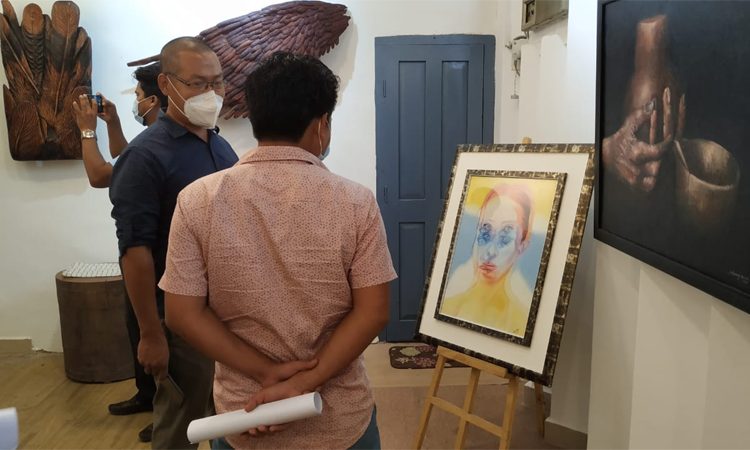 The second edition of Dimapur Art Festival which was underway here at IMC Hall Dimapur, concluded on Saturday.
The day also marked the formal inauguration of the Nagaland Art Centre by Pastor Supong Jamir, Dimapur Christian Fellowship which will be operating from the premises of the IMC Hall.
Last year, when Eastern Art Council (EAC) organized the first Dimapur Art Festival at Super Market, Dimapur in collaboration with Task Force for Music and Arts (TaFMA) with the objective of bringing local artists together and promoting their talent, it was decided that a dedicated gallery at Super Market would remain open to the public six days a week. However, on Saturday, coordinator of EAC, M. Ababe Ezung declared that the gallery would be now operating from IMC Hall.
Ezung said that the pandemic hit the idea hard as just when things were picking up speed, the lockdown was imposed and the gallery had to be closed, and since it was a rented place, it became difficult to run the gallery from there.
He said that the proceeds from the Nagaland Art Centre would go maximum to the artists and a small percentage would be kept aside to upkeep the centre as well as to contribute to the charitable works carried out by the IMC Foundation.
He mentioned that at the Centre, everyone is a stakeholder and added that in the days to come the centre would organize workshops and skill development courses.
One of the artists who spoke on the occasion said that Nagas as a whole has a lot of cultural heritage on their back and art or the Centre is not about business. He added that the Centre is the initial platform in Nagaland and this is where the artists will start their journey.
Earlier, Pastor Supong Jamir in his address had asked the artists to use their skills for the glory of God.
More artists are expected to display their arts in the Centre in the coming days and the plans of an adjoined café as well as a theatre are underway. The prices of the available works of art in the Centre range from Rs 3000 to Rs 1.50 lakh.
The Centre presently displays drawings, paintings, sculptures etc. On the opening day, Sentienla, who has her workshop nearby the Centre launched her collection of recycled papers which she made using plants and clothes.
The 3-day festival which had commenced on October 15 saw the participation of more than 30 participants.