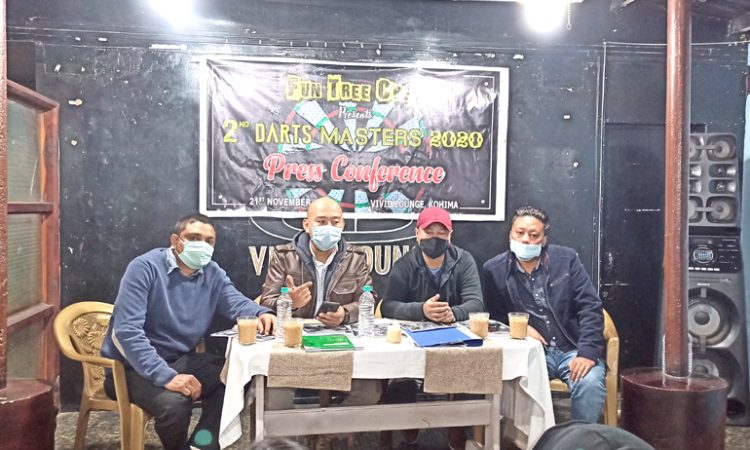 Kohima, November 21: Fun Tree Crew (FTC) is all set to hold the 2nd Darts Masters on December 12 at Vivid Lounge, Kohima.
Giving a brief outline about the tournament at a press conference at the lounge here Saturday, a FTC spokesperson said the competition is organized with an aim to promote the sport and identify potential darters in Nagaland, who will later be able to participate nationally and hopefully represent the State at international level.
While the registration fee is Rs 1500, the competition is an open tournament with 32 slots and the last date for registration is December 5.
Participants will be divided into 4 groups, where 8 players will vie for the top two spots in their respective groups in the preliminary rounds and the top two players will proceed to the knockout stages.
The tournament with a prize pool of Rs 70,000; the winner will receive Rs 15,000 along with a trophy and a certificate. The runner up will be awarded Rs 10,000, with a trophy and a certificate and two darters will share the joint 3rd position, each player will receive Rs 5,000 each.
Also, prizes have been arranged for the highest score, highest check out, best leg and most promising player.
Taking into account the existing Covid-19 situation, the event will be exclusively for participants and the organizers who will follow the SOP. Due care will be taken as in providing thermal scanners, hand sanitizers and masks.
In this regard, the tournament will be live-streamed on Facebook and Instagram from FTC social media handles.
While registration forms will be available at Vivid Lounge and Zumvu Printex Kohima, people can also register online, FTC spokesperson said.
Established in 2018, FTC was founded as a non-political and non-profit organization with the members firmly resolved to join in harmony as one individual and an indissoluble group. Naga lad to represent India
Also present at the press conference was Vikehelie (Azeu) Suohu from Kohima Village who will represent India in the upcoming JDC’s Virtual Amateur Darts Championship which is scheduled to be held from April 7-13, 2021 at Gibraltar.
Talking about his journey toward claiming a spot in the qualifying rounds of the championship, Suoho said that he faced some hurdles regarding internet connectivity as it was conducted virtually. “However, I managed somehow,” he added.
He also shared plans to open a coaching centre for darts at his place for youngsters below 15 years. Explaining about his specification about the age, he said the dart scene in Nagaland does not have that much youth and he believes that grooming someone from a young age can really help develop talents to meet international standards.
Suohu already has some titles in his name. He was the winner in the Open Darts Championship Dimapur in 2014, FTC Darts Masters in 2019 and Joint 3rd (Team Event) in the IDF (Indian Darts Federation) National Darts Championship in 2019 and Joint 9th (Open Singles) in the IDF National Darts Championship in 2019.
(Page News Service)

Ravi retains Asian title, Bajrang settles for silver after withdrawing from final due to injury