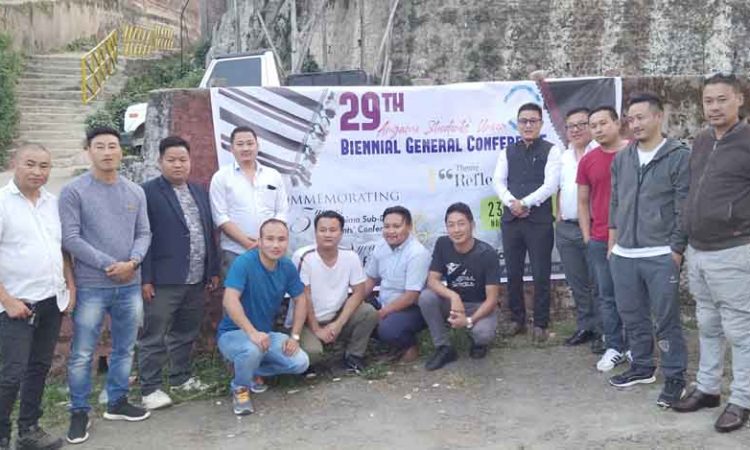 Informing this during a media briefing at ASU office here this evening, its president Vizokho Zashümo said the ensuing conference will be a two-pronged celebration — first the 75 years of Kohima sub-division students conference and 50 years of Angami Students Union — as part of its biennial conference.
He said in the olden days, Kohima Sub-division Students Conference comprised of Angami, Chakhesang, Rengma, Pughoboto Sumis, Kuki and Zeliang students. Its first president was Goyiepra Kenye in 1946.
He said with Statehood and bifurcation of districts, other tribes went to form their own bodies while the Angami Students’ Union was christened in 1970 with Kevisiezolie Suohu as the first president.
Zashümo informed that the introductory session will be on April 23 at 6 pm with Advisor for Technical Education & Elections, Medo Yhokha as guest while Chief Minister Neiphiu Rio will be inaugural guest the next day at 9:30 am.
Central Organising Committee convener Kesosul Christopher Ltu expressed hoped that the ensuing ASU conference would re-strengthen the relationship with those tribes Angamis associated in 1946 and also the federating bodies of NSF as they are expected to attend it.
He said that the resource persons are dynamic and versatile.
Considering the pandemic situation, he said unlike the previous years where the delegates used to be around 1000 from the four ranges of ASU — Northern, Western, Southern and Chakhroma — this time they are inviting only 100 members each from the ranges. Around 500 people including the officials will be camping in Kisama following all COVID-19 protocols, he added.
Further, Ltu invited all those who have served the ASU in the past and also the family members of those who are no more alive to be part of the conference.
A cultural exchange programme among the six members of Kohima Sub-Division Students Conference will be held on April 24 with NPMHR secretary general Neingulo Krome as guest.
Meanwhile, Zashümo said that they would use the main arena including the ground and galleries in order to follow the distancing norms against COVIF-19.
He also cautioned groups and people visiting Kisama to avoid it during the evening.
He said that ASU would be conducting sanitization drive from 6:30 am to 7:30 am during the conference.
Other sessions for the 3-day event include: traditional exhibition and competition of indigenous games – indigenous cart race, local rice pounding, bamboo stilt race, war cry and traditional fire making.
Academic competition will feature debate on the topic “The National Education Policy 2020 will ensure quality education in Nagaland” and first-ever extempore speech from intending candidates for ASU 2021-23 officials. Minister for Higher Education and Tribal Affairs, Temjen Imna Along will grace the session.
Further, Convener Ltu informed that the Sunday devotional service offertory will be gifted towards charity.
On the other hand, ASU election commissioner informed that altogether 18 aspirants have collected the nomination forms for election of ASU officials for 2021-23.
He said the last date of filing nominations for the various posts of ASU office is April 19 till 2 pm.
He said a conventional system of mutual understanding and giving opportunity to the ranges on rotation basis is in place but since there is no specific norms in the constitution, further consultations with four ranges and seniors will be held to keep the election or selection process clean.

Elaborating on the theme “Reflections”, Zashümo said this conference provides an opportunity to reflect in a process of understanding of the valued past, present and the possibilities of what we can be and requires us to do in our shared future.
“The natural Angami Naga ways of life and norms to enable the real essence of doing what is right even if nobody is doing it and the principled ways of not doing what is wrong even if everybody is doing it are two concepts we aspire to reflect upon,” he said.
Advisor for IT, Science & Technology and NRE, Mmhonlumo Kikon will grace the valedictory function on April 25 at 2:30 pm. (Page News Service)