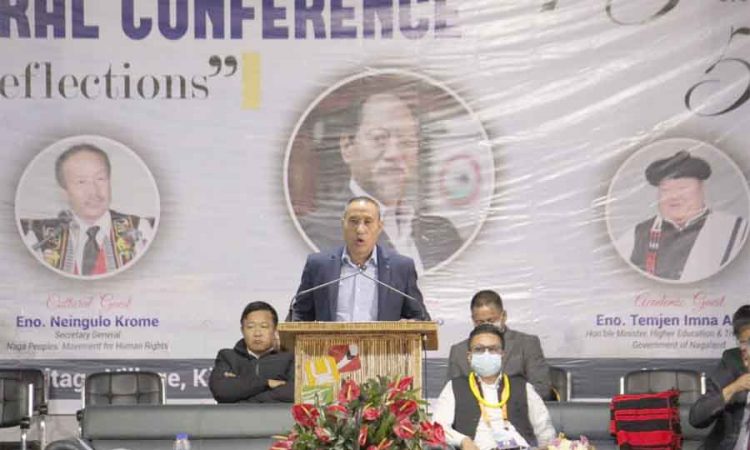 Around 400 student delegates from the four ranges – Northern, Southern, Western and Chakhroma are attending the conference, which assumes significance as it is coinciding with dual jubilee – first the 75 years of Kohima sub-division students’ conference and 50 years of Angami Students Union.
Gracing the introductory session, Advisor for Technical Education & Elections, Medo Yhokha said 50 years of ASU is opportune time for the present generation to work further to achieve the goals and visions of the pioneers.
To work and fulfill the aspirations of the people and to anchor the dreams of the hundreds and thousands is a major challenge, he said.
A time for collective effort and so let’s work together, he said adding that this is a transitional period from the past to present and the future.
He said the past has shaped us to be where we are and it is our moment to build the future society of our own choice.
We have to reflect the inheritance of the forefathers and gear up to face the challenges of air condition and environmental issues, he said.
Today as inheritors of the legacy passed on down the generations, we have the responsibility to pass the best to the next generation.
“Let’s overcome all petty differences but stand together for each other with a positive and constructive attitude,” he appealed.
Also be serious on the theme “reflections” to reflect back with positivity and pass on the baton to the coming generations, he said.
Issues concerning education, climate, health, environmental, employment, human rights have to seriously dealt with instead of continuing to bask on the past glories of the forefathers, the young legislator stressed.
“We have to thoroughly reorient ourselves for a better tomorrow and resurgence of the Angamis,” said Yhokha.
Also asking the youngsters to be the harbingers of change to see the change, he said we should reflect on our own responsibilities to be carried forward in order to have a strong and vibrant society.
On behalf of the youngsters, Yhokha, a former ASU president (2005-07), reiterated to carry on the legacy and ideologies left behind for the Angamis and the Nagas in general by the pioneers.

The first ASU president, Kevisiezolie Suohu dwelled on the topic “ASU as envisioned by the pioneers”. He also showered elderly blessing upon the students’ community.
Extending greetings, Angami Youth Organization president Kekhrie Pfukha said 50 years of existence is a time to introspect and retrospect the past and work for the future.
Meanwhile, Chief Minister Neiphiu Rio will be the inaugural guest on Saturday at 9:30 am.
(Page New Service)