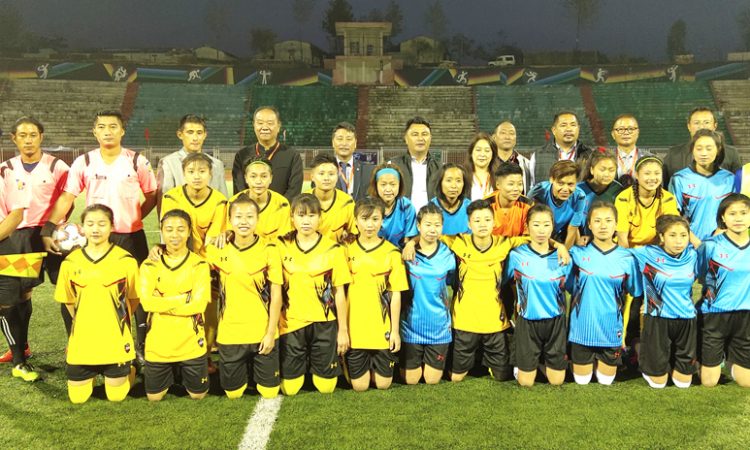 Nagaland has many sports persons but lack hard work and dedication: Neikha

Jointly organized by the Department of Youth Resources and Sports (YRS) and Nagaland Football Association (NFA), the tournament could not be held in 2020 due to the pandemic while Phek district are the defending champions, after winning the 20th edition held in 2019.
Speaking as the special guest of the inaugural programme under the floodlights of IG Stadium here tonight, Advisor for YRS, Zale Neikha opined that Nagaland has many good sportspersons but players don’t devote and dedicate themselves fully in the field of sports.
“We consider sports as secondary and when there is any big tournament, then only we start practicing with full swing and start demanding for every little thing to be provided fully by the Government or Association,” he lamented.
Acknowledging that good sportspersons need full equipment, he however said “it does not make us a winner”. To be a winner, Neikha said, “We need to improve our skills, techniques and devote our full time and dedication”.
Maintaining that skills and techniques “does not come from the turf ground and with full equipment, but from one’s hard work and dedication”, the Advisor cited the legendary Dr. T Ao, the first Naga Olympian and a football icon who was once the captain of the Indian team.
‘When we look at Dr. T Ao’s sports career there were practically no facilities or infrastructure available nor was there association or government to help or mould him, yet he did not let anything hinder him for reaching his goals and the love for football,’ he said.
Neikha expressed that today a good sportsperson is regarded highly in the State as well the country while one can earn their livelihood from the field of sports.
He called upon all to take this as an opportunity ‘to earn and also bring laurels to the society’, State and nation. “We should remove the stigma that sports is nothing but something to pass time; instead we should be like Dr. T Ao, and follow his footprint, whose hard work and commitment propelled him achieving excellence in the discipline of sports,” he said.
The Advisor also urged sportspersons to keep alive the memory of this legendary sportsperson to serve as an inspiration for the future generation.
Further, Neikha said that the PDA government under the leadership of Chief Minister Neiphiu Rio has decided to create one Sports Battalion under Nagaland Police, and it is a great opportunity for all and especially for the upcoming young talented Naga youths.
Despite limited resources of the State, Neikha said IG Stadium has AtroTurf ground while 3 AstroTurf grounds will be completed this year — one each in Dimapur and Tuensang (both under State Plan) and one in Mon under Khelo India Scheme.
Commissioner and Secretary YRS, Alun Hangsing said this championship started in 1976 until it was rechristened in 2004 by befittingly calling it as Inter District Football Championship, Dr. T Ao Trophy through the initiative of Chief Minister Neiphiu Rio.
The reason is to give honour and importance to Dr. T Ao and to inspire and motivate the youth of our State in general and the young footballers in particular to achieve the goal set by our legend, he said.
Hangsing said Ao excelled not only in his studies, but also in football and other sports. In 1937, he was awarded the Best Sportsperson Trophy in Inter-High School Tournament in Jorhat and was the individual champion in Athletics at Cotton College for three consecutive years.
He went on to win the individual championship in Athletics at Calcutta University in 1946 and 1947. In football, Ao played for Cotton College and the then reputed Maharana Club of Guwahati till 1942. In 1943, he joined the renowned Mohun Bagan Club of Calcutta and captained it for two years. Established as a soccer star, Ao was chosen to play in the Indian team. He also led the Indian team to the Far East to play exhibition matches in Hongkong, Singapore, Kuala Lumpur, Bangkok and Decca.
Ao captained the first free India football team in the 1948 London Olympics at Wembley Stadium on July 29. He was the flag bearer for the Indian contingent. After passing MBBS in 1950, Ao joined Dibrugarh Medical College and was transferred to Kohima as Assistant Surgeon in 1953. He went on to become the first Naga Director of Health Services till his retirement in 1978.
He also received the rare honour of being made a member, and later elevated to executive member, of All India Council of Sports. It was largely due to his untiring efforts that the Nagaland Football Association and the Nagaland Badminton Association has been recognized and affiliated to the National bodies.
Ao passed away after a brief illness on September 13, 1998, leaving behind a legacy of laudable achievements. Today, the Government has started a Football Academy in his name at Seithekema, Dimapur District to cater to all the aspiring football players and to produce more professional footballers from the State and the region.
The inaugural function was followed by a women football exhibition match between IGS XI and Kohima XI.
The championship will follow one league-cum-knock out format. Group A comprises Phek, Peren and Tuensang; Group B- Zunheboto, Noklak and Kiphire; Group C includes Dimapur, Mon and Wokha while Group D includes Kohima, Mokokchung and Longleng.

In the league system, there will be four matches daily from April 13 till 15. Quarter finals will take place on April 16 while semi finals have been scheduled for April 17. The champion will receive cash award of Rs 3 lakh while runner-up will receive Rs 2 lakh and the losing semi finalists will get Rs 50,000 each.
Matches for April 13: