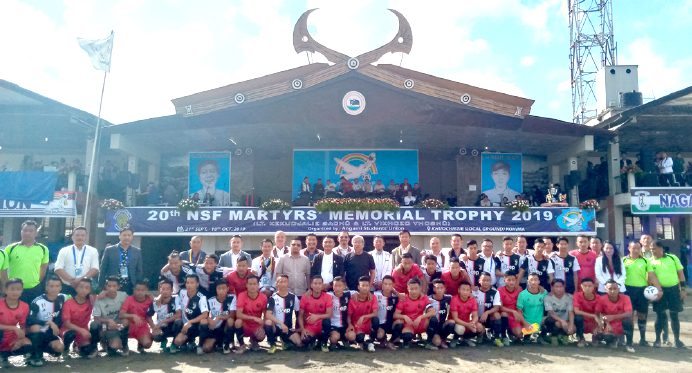 Kohima, September 21: The 20th NSF Martyr’s Memorial Trophy 2019 under the aegis of Angami Students’ Union (ASU) began today at Kohima Local Ground on the theme “Goal for peace”
Altogether, 37 teams including one team from Manipur joined this 20th edition, which will continue till October 19.
ASU secretary for games & sports Kevisetuo Sechü administered oath to the participating teams while ASU tribunal general Aja Zinyü chaired the opening ceremony.
Nagaland’s housing and mechanical department minister Tonpang Ozukum, urban development and municipal affairs advisor Dr. Neikiesalie (Nicky) Kire and several other dignitaries also present at the opening ceremony.
Speaking on the occasion, Youth Resources & Sports Advisor, Er. Zale Neikha maintained that sports play an important role in nation building by creating a sense of oneness and togetherness among its citizens.
“Sports build a strong character and elevate the confidence level in the youths of a country so that one can face the challenges of the competitive world and become successful to contribute in the nation’s development,” he said while gracing the opening ceremony as the special guest.
He said that football is the world’s most popular sport, played by 250 million players in over 200 countries and it became one of the most entertaining games of the world today.
Stating that Nagas have a long way to go in the development of sports, Er. Neikha said “With proper guidance, motivation and support, our boys and girls can excel in the field of sports.”
Stating that the state government cannot guarantee a job for every fresh graduate, he said sports as a discipline can be a source of advertisement, marketing and sponsorships.
Therefore, he said sports has to be given equal importance in the school curriculum, rather than being just a recreational activity.
“Sports development should begin at an early age alongside school curriculum,” he said.
He informed that the Department of Youth Resources & Sports, with the objective to nurture and prepare our young footballers for the future, has initiated Free Coaching Camp’ for both Boys & Girls U-14 years at 1ndira Gandhi Stadium every Wednesday & Saturday.
The advisor strongly appealed every school authority within the state, to broaden “our outlook and perspective and become more practical, and give more opportunities to our students to explore their hidden talents and develop their creativity.”
Er. Neikha also challenged the established business tycoons, contractors and other like-minded persons to come together and establish Football Clubs like our neighbouring states, while setting up their own standard turf, practice pitches and providing scholarships to their players.
This will enable our fellow talented footballers to improve their skills and tactics and become professionals in the future, he said.
To enable our sportspersons to be trained and become better players, we need to revive the ‘Nagaland Premier League’ (NPL) which at one point of time had become very prominent, Er. Neikha said.
He announced that the PDA government is taking keen interest in reviving and promoting Nagaland Premier League’ (NPL) in the state.
The concerned department along with the stakeholders is working out the modalities for re-initiating this league soon, he said and strongly felt that participation in these league matches will encourage footballers to develop their techniques, while exposing them to the bigger arena.
In solidarity message, Naga Students’ Federation (NSF) president Ninoto Awomi appreciated ASU for always taking responsibility of NSF in organizing this NSF Martyrs’ Trophy in honour of the martyrs.
He said that on 20th of March 1986, when thousands of students came forward to extend their solidarity to the NSF to protest against the extension of the Disturbed Area Act (DAA) from the 5 KM belt to 20 KMs along the Indo-Burma border and the Introduction of the Indian Police Service cadre in Nagaland, Lt. Kekuojalie Sachü of Kohima Village and Lt. Vikhozo Yhoshü of Kigwema village succumbed to the indiscriminate firing of the armed police forces from Alichen upon the peaceful agitating students.
“33 years ago, when the aspirations and the existence of the Naga people have been cast upon the shadows of political despair and uncertainty, we took to the streets into that darkness of times and lost two precious lives,” Awomi said.
Yet through the martyrdom of the two noble souls, the aspirations of the Naga youths and our hopes were renewed once again with a renewed sense of direction and purpose, he said.
“We the Naga youths and the upcoming generations remain indebted for the dearly departed souls and shall continue to honor the sacrifices of Lt. Kekuojalie Sachü and Lt. Vikhozo Yhoshü through the pages of history and from the fond memories of our hearts,” he said.
ASU president Vizokho Zashümo said that football is not just the most popular sports in the world. It is an exciting force in bringing people together.
“We live in an age where our society is in very strong pursuit for peace and it appears as though it is a mere dramatic pursuit but we require this important task than ever before. Let us all examine our own attitude in the raging crisis our society is embroiled in- the mistrust and suspicion of our various tribes and communities,” said Zashümo.
We must and should transcend beyond this, he added.
Centurion FC wins inaugural match
Defending champions Centurion FC Kohima village blanked Poimi SU Kohima 5-0 during the encounter in the inaugural match today.
Yhunshalo Kemp scored four goals for Centurion FC. His goal came in the 29th, 31st, 49th, 78th minute.
Kevisalie Sechü netted another goal for Centurion FC in the 3rd minute.
September 23 matches
*M.V.Y.O Meriema vs Fantastic FC at 12:30 p.m.
*KVSU Kijumetouma village vs Young Rising Star at 2:30 p.m.
(Page News Service)