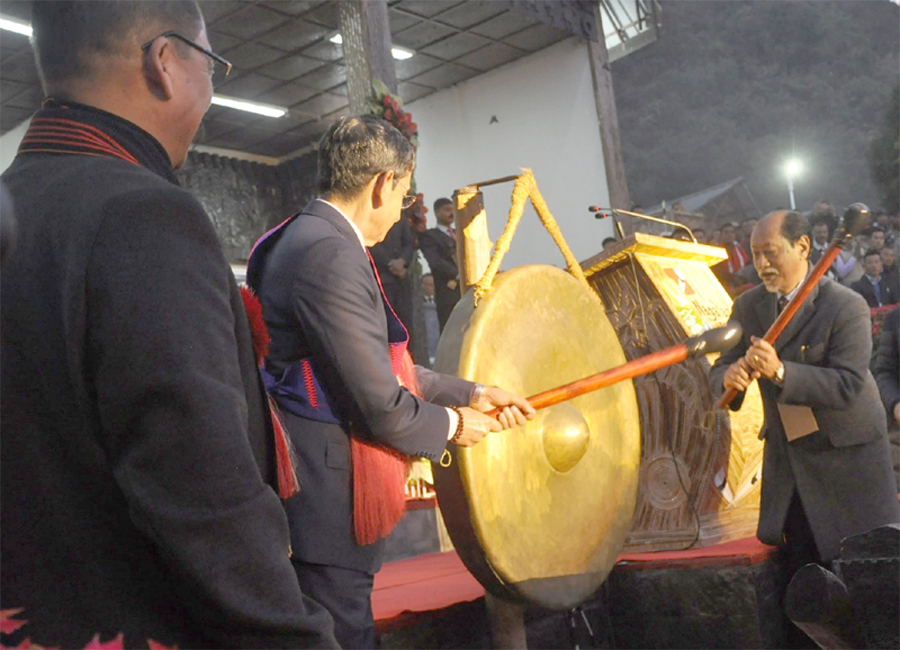 Kohima, December 1: The 20th edition of Hornbill Festival of Nagaland, coined as the festival of festival, got off to a spectacular start with traditional war cry of the 17 Naga tribes and beating of gong by Governor R N Ravi and Chief Minister Neiphiu Rio at the picturesque Naga Heritage Village, some 12 kms from the State capital along Kohima-Imphal National Highway-2.
Hornbill Festival is an annual tourism promotional event organized by the State Government. It is a cultural extravaganza to revive, protect and preserve the richness and uniqueness of Naga heritage.
Tourism officials said the first day of the festival at Kisama was witnessed by 45,142 visitors, which included 407 foreigners, 4954 domestic tourists and 39,782 locals.
In his welcome address as the chief host, Governor Ravi praised the rich cultural heritage of Naga tribes and underscored the need to correct certain uncharitable distortions to Nagas’ history by some colonial administrators.
He wondered how could the Naga tribes with their centuries old village republics that efficiently managed their social, economic, political and strategic needs for so long be called behind in civilization.
The Governor rued that unfortunately some people erroneously equate civilization with modernity and urged the scholars, especially Naga scholars, to do deep researches into the rich civilizational history of the tribes of Nagaland.
Ravi, who is also Center’s interlocutor for Naga peace talks, said that a new dawn for Nagaland is breaking and urged the 2 million people of Nagaland to help build a new Nagaland free from fear of gun and corruption, a new Nagaland based on the foundations of transparency, accountability and rule of law.
At this crucial juncture when the final settlement that would ensure enduring peace is within grasp, the Governor urged the people to strengthen the spirit of unity so palpable during the Hornbill Festival.
Nagaland is at the cusp of history, he said adding that a new dawn of a new Nagaland is beckoning us.
Today being the 57th Statehood Day of Nagaland, he paid rich tribute to the Naga leaders who, under extremely challenging circumstances, secured for the people, the Nagaland State with special status. He paid tribute to their extraordinary courage, political vision and strategic foresight.
He exhorted the people not to forget the leaders who got the Nagaland State and reminded them that history has not been kind to those who ignore or forget their heroes and martyrs.
The inaugural session was marked by presentation of Naga folk dance and songs by the different tribes under Task Force for Music and Arts. (Page News Service)