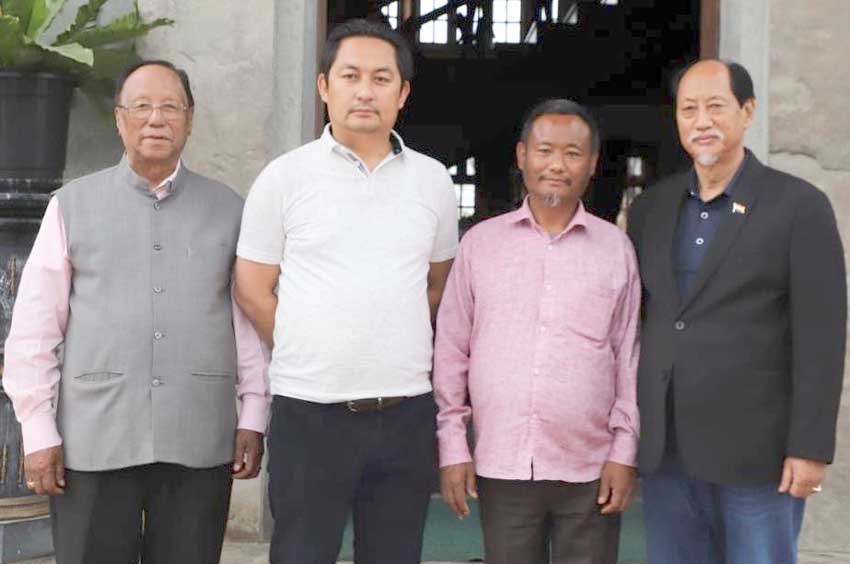 Kohima/Dimapur, March 20: In a major boost to the ruling Nationalist Democratic Progressive Party (NDPP), 2 MLAs of National People’s Party (NPP) in Nagaland merged with the ruling party on Wednesday.
NDPP spokesperson, Merentoshi R Jamir confirmed the news of the two NPP legislators – L Khumo and Imnatiba of having decided to merge with NDPP.
In a statement circulating in the social media, which was reportedly being circulated by Advisor for Industries and Commerce, MLA Imnatiba today stated that despite repeated request from his side, the NPP party leadership, unfortunately, decided to field candidate against PDA consensus candidate in the ensuing bye-election to 26-Aonglenden Assembly Constituency.
The statement stated that it has given wrong wave in constituency and negative impression of PDA to the people of Nagaland, “giving more opportunity to our opponents to corner us during this Lok Sabha election”.
The MLA therefore said that “to seal stability to our PDA government permanently under the able leadership of CM & Dy CM and to silent all political fantasy of our opponents, Khumu & I have merged with NDPP this afternoon (sic)”.
In a late night statement today,  the NDPP welcomed Imnatiba and L Khumo into the party fold as they have merged with the NDPP.
“The merger will strengthen the PDA Government under the progressive leadership of Chief Minister Neiphiu Rio and Deputy Chief Minister Y. Patton. It will enhance stability and ensure that the PDA Government remains focused on the agenda of all round development in an inclusive manner,” the statement said.
All rank and file of the NDPP led by Chief Minister and the Party President Chingwang Konyak welcomed the two MLAs into the party fold along with their supporters and well wishers.
The NDPP looked forward to a fruitful partnership and positive contributions towards the upliftment of the society by the two capable leaders.
NPP vice president resigns
Meanwhile, the vice president of NPP Nagaland unit, T Chalukumba Ao has resigned from the post and membership of the party.
In a letter addressed to NPP President, Chalukumba stated that NPP has gone against the spirit of camaraderie in the PDA by fielding its own candidate (NPP) to the bye-election in the 26-Aonglenden A/C despite requests to support the consensus PDA candidates.
He stated that in the spirit of alliance, the constituent parties-NDPP, BJP, JD(U) and the lone Independent member supported Tokheho Yepthomi and Sharingain Longkumer to be the PDA consensus candidate to the Lok Sabha and the bye-election to 26-Aonglenden A/C respectively.
Nagaland Page tried to call state NPP president but there was no reply.
This is not the first time that MLAs of smaller parties have merged with the major ruling party. In the past, BJP MLAs had merged with the ruling NPF and then the opposition Congress had also merged with the ruling NPF. (Page News Service)