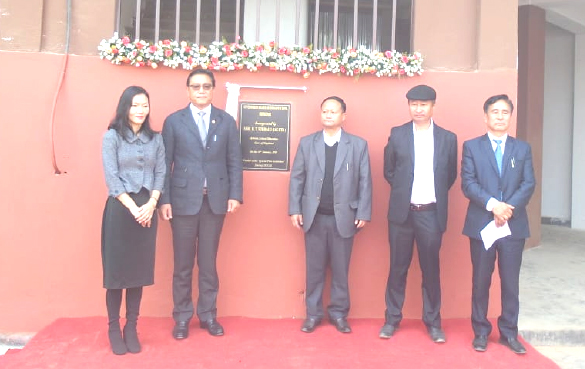 Dimapur, January 30: The two new school buildings of GHSS Diphupar, built at a cost of Rs 2.8 crore, were formally inaugurated by Advisor School Education, KT Sukhalu (IAS Retd) on Wednesday.
Speaking on the occasion, Sukhalu said that there are presently 1,913 schools run by the government in the state and to reach every corner the government has been taking over privately run schools. It remains a challenge for the government to ensure such buildings everywhere, he added.
He said while the school is a government institute, it is going to be difficult to be successful unless there is a community support and expressed gratitude towards DNSU and others who stood by the school for years.
He said that in a society where easy money is preferred, it is the responsibility of the community to take care of the development of the human resource and subsidies and easy money isn’t going to make Nagaland great.
Reminding the teachers about their responsibility and how their lives are going to influence the lives of the children, he said that the teachers of the government schools are among the best qualified teachers and there is a need for the teachers to remind themselves this.
He also asked the students to be diligent and start working on their goals from now. He announced that any student from the government schools who will be able to secure a place among the top 10 in the HSLC and HSSLC examination stands a chance to get Rs 1 lakh from the government and asked them to work for it.
GHSS Diphupar was established in the year 1973 as a private school and was taken over by the government in 1975. In 1984, it was upgraded to HSLC and in 2017 it became a higher secondary school.
The two new two storey buildings were built under Rashtriya Madhyamik Shiksha Abhiyan (RMSA) and Special Plan Assistant and have 12 classrooms, separate toilets for boys and girls besides office rooms and other necessary rooms.
Previously, Chubatemjen, chairperson of the programme had mentioned that with the inauguration of the new buildings, it has also become the first government school in entire northeast to have bio-metric attendance of the teachers.
(Page News Service)

Nagaland’s first PSA plant to function from May 17