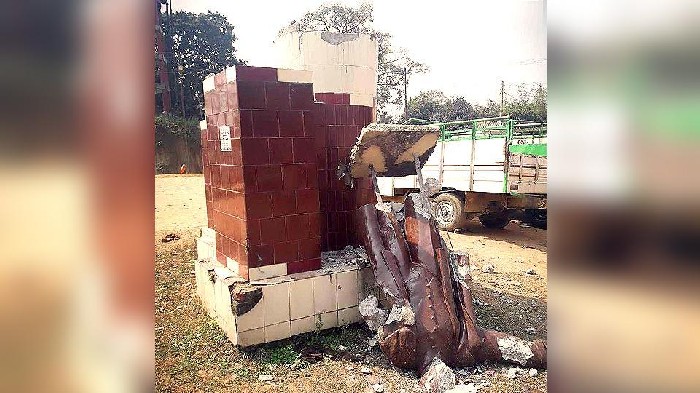 Agartala, March 6: A couple of statues of communist icon Vladimir Lenin were pulled down in Tripura, police said on Tuesday, even as authorities struggled to contain the post-poll violence after the BJP swept to power on March 3 and ended 25 years of leftist rule in the state.
According to police, a Lenin statue was demolished with a payloader in Belonia and another one was razed to the ground at Sabroom — both in the state’s South district.
“People in the area wanted statues of national heroes such as Swami Vivekananda, Sardar Vallabhbhai Patel, and Mother Teresa instead of Lenin since long. Whatever happened in Belonia is the outcome of public fury,” BJP spokesperson Subrata Chakraborty said and denied that party workers have a hand in the demolition.
The BJP and the Communist Party of India (Marxist), which ruled the state for a quarter of a century, blamed each other for the violence.
The second demolition happened about two days ago but was discovered on Tuesday, according to police. “We are looking into the matter,” South district superintendent of police Manchak Ipper said.
Section 144, which prohibits assembly of more than five people, was in place in many areas and police arrested Ashish Pal, the driver of the payloader used to topple a statue of Lenin in Belonia on Monday. Pal is a resident of Udaipur in Gomati district and was hired by the vehicle’s owner.
In a video clip, which has been shared widely on social media, a mob can be heard chanting Bharat Mata Ki Jai when the statue was tumbling down. Police sources, requesting anonymity, said a victory procession was being carried out by the BJP when a group broke out and directed the payloader to the statue.
The demolitions happened as supporters of the two parties allegedly clashed in several places.
BJP state vice president Subal Bhowmik said around 49 party activists were wounded in attacks by CPI(M) men. “Even police from the lower ranks were working at the behest of CPI(M). After taking oath of office, we will take stern action against the people involved in violence,” Bhowmik said.
For its part, the CPI(M) wrote of attacks by “BJP?goons” on party offices and members across Tripura in a letter to Prime Minister Narendra Modi, accusing his party of inciting violence after its victory in the assembly polls held this February.
Politburo member M Salim sought Modi’s “immediate intervention” in the matter. “These goons have unleashed a reign of terror. 514 individuals were injured, 1,539 houses were attacked, 196 houses were set on fire, 134 CPI(M) offices were attacked and 208 party offices were captured,” he said. (Courtesy: HT)