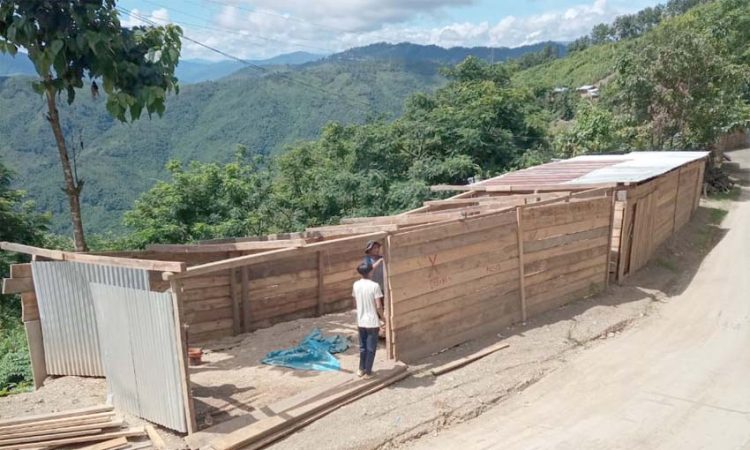 DIMAPUR, SEPTEMBER 7: A group of villagers in Meluri Sub-Division, Phek District, on Tuesday dismantled structures that have been recently built along the proposed RoW of the 2-lane project on NH 202, which stretches from Akhegwo to Akash Bridge (Jessami).

The Extra Assistant Commissioner (EAC) of Meluri, Yithachu Thur told Nagaland Page that the location where the villagers had dismantled the temporary structures was at Akhegwo junction.
Recently, the Managing Director of NHIDCL had written a letter to Nagaland Chief Secretary, informing of their decision to withdraw further construction activities in connection with the said project, due to the local population building large number of structures on the proposed RoW with the sole intention of getting undue compensation.
According to the EAC, there were more than 800 structures built along the 42.440 km stretch.
Following the NHIDCL letter, the Meluri Administration conducted a series of meetings with the village leaders and elders.
The EAC said that the purpose of the meeting was to make the village leaders understand, not “frighten” them.
“It took us 3 to 4 days to communicate with them and they agreed to take down the structures on the strict condition that genuine standing structures will be compensated properly”, the EAC informed.
He said that the group of villagers who dismantled the structures on Tuesday was led by the Village Chief of Kukegwo.
Thur expressed hope that other villages will also follow suit.
“Tomorrow, we have a meeting at Meluri Village. This time, it is with the people who have constructed the structures, and not with the village leaders. We are looking forward to fixing the problem together”, the EAC shared.

In his letter to the Chief Secretary, the Managing Director of NHIDCL had stated: “I am afraid to inform you that till the structures are removed, we are withdrawing all further activities and have decided not to move the Ministry for approval of the project. I reiterate that we shall not take up this road unless the District Administration clearly demarcates the genuine structure(s) and removes the in-genuine ones”.
(Page News Service)