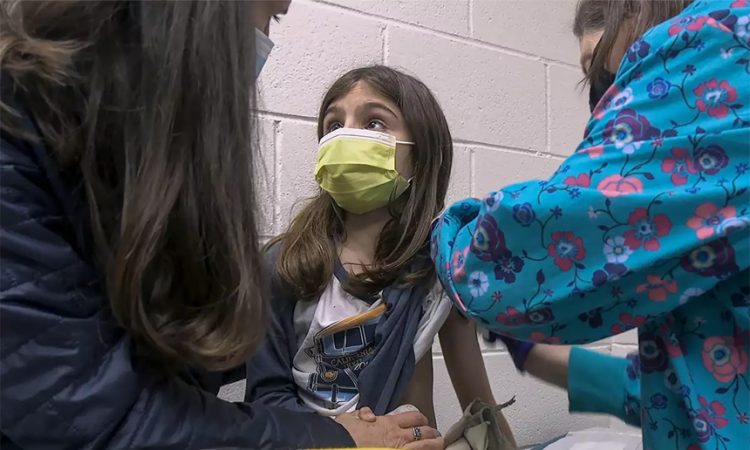 New York, June 16: The Moderna COVID-19 vaccine and an experimental protein-based preventive proved to be safe and showed good antibody response against SARS-CoV-2 in a trial on baby rhesus macaques, scientists say.
The research, published on Tuesday in the journal Science Immunology, suggests that vaccines for young children are likely important, safe tools to curtail the pandemic.

“Safe and effective vaccines for young children will help limit the spread of COVID-19 because we know children can transmit the virus to others, whether they get sick from SARS-CoV-2 infection or remain asymptomatic,” said Sallie Permar from New York-Presbyterian Komansky Children’s Hospital, US.
“Moreover, many children have become sick and even died from the infection, with many more negatively impacted by the measures put in place to curb the spread. Thus, young children deserve protection from COVID,” Permer said.
The strong neutralising antibody response elicited by the vaccines in 16 baby rhesus macaques persisted for 22 weeks.
The researchers are conducting challenge studies this year to better understand potential long-lasting protection of the vaccines.
“The level of potent antibodies we observed were comparable to what has been seen in adult macaques, even though the doses were 30 micrograms instead of the 100 microgram adult doses,” said Kristina De Paris, professor at the University of North Carolina, US.
“With the Moderna vaccine, we observed specific strong T cell responses, as well, which we know are important to limiting disease severity,” De Paris said.
The researchers immunised two groups of 8 infant rhesus macaques at 2.2 months of age and four weeks later.
Each animal received either a preclinical version of the Moderna mRNA vaccine or a protein-based vaccine developed by the National Institute of Allergy and Infectious Diseases (NIAID), US.
The mRNA vaccine delivers instructions to the body to produce the virus’s surface protein, the spike protein.
The vaccine instructs the cells to create the spike protein, which the virus uses to infect and enter the human cells.
The human immune cells recognise the protein and develop antibodies and other immune responses.
NIAID’s vaccine is the actual spike protein itself, which the immune system recognises in the same manner.
Both vaccines elicited high magnitude of IgG neutralising antibodies against SARS-CoV-2 and spike protein-specific T cell responses, the researchers said.

The vaccines did not elicit T helper type 2 responses, which can be detrimental to vaccine efficacy and safety in infants, they said.
The researchers said since such responses can counter the immune response against the virus, T helper 2 responses have hindered the development of vaccines in young children.
“We were sure to check for evidence of T helper 2 responses, such as IL4, in the blood plasma of all macaques to be sure neither vaccine produced such a response,” De Paris said.
“We need to keep studying this, but so far we have seen no evidence of this,” she added. (PTI)