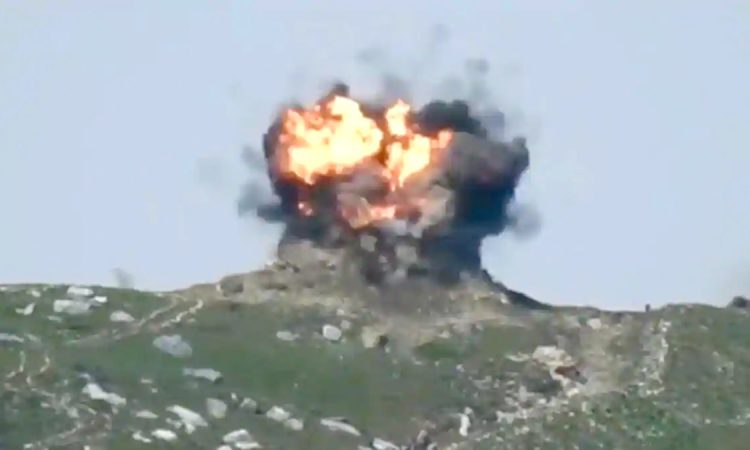 Pakistan violated ceasefire along Line of Control in the Keran sector of Jammu and Kashmir on Friday. India destroyed multiple Pakistani bunkers and terror lauch pads in retaliation. (ANI Photo)

New Delhi/Srinagar, November 13: At least eight Pakistani soldiers were killed on Friday and 12 injured after Indian Army targeted Pakistani positions across the Line of Control (LoC) in north Kashmir with artillery guns and anti-tank guided missiles in response to heavy shelling by the neighbouring army in which eight Indians — including four security personnel — lost their lives, people familiar with the developments said on Friday.
Pakistani ammunition dumps, fuel dumps and terror launch pads were among the targets destroyed by the Indian Army, they said.
The heavy exchange of fire — triggered by ceasefire violations by the Pakistani army in multiple sectors on the eve of Diwali — has turned the spotlight on the LoC at a time when Indian and Chinese forces are locked in a border dispute along the contested Line of Actual Control (LAC) in the sensitive Ladakh sector where a disengagement plan is under discussion but has made no progress so far.
Three Indian soldiers, a Border Security Force sub-inspector and four civilians, including a woman and a seven-year-old boy, were killed in Pakistani shelling in Uri, Naugam, Keran and Gurez sectors in north Kashmir, the officials said, asking not to be identified. Three Indian soldiers were injured.
The Pakistani casualties include at least two Special Service Group commandos, they said.
The Indian Army blamed Pakistan for unprovoked ceasefire violations along the LoC. “Pakistan initiated unprovoked ceasefire violations along the LoC spread across multiple sectors including Dawar, Keran, Uri and Naugam. Pakistan used mortars and other weapons,” said Srinagar-based defence spokesperson Col Rajesh Kalia. He said that the neighbouring army deliberately targeted civilian areas.
“Our troops retaliated strongly causing casualties and substantial damage to Pakistan army’s infrastructure across the LoC. Several ammunition dumps, fuel dumps and multiple terrorist launch pads have been damaged,” Kalia said.
The Pakistani army began shelling Indian positions after the Indian Army foiled a major infiltration attempt in the Keran sector, the officials said. There has been a significant increase in ceasefire violations by Pakistan this year.
While the neighbour violated the ceasefire 3,233 times last year, the figure this year stands at 4,052 so far, according to army data. Pakistan carried out 394 violations in October as against 128 till now in November.
The Indian Army released several images, including unmanned aerial vehicle (UAV) footage, showing multiple Pakistani bunkers and other positions going up in flames in the retaliatory Indian action. One of the videos released by the army showed a Pakistani soldier running for cover before his post was hit by an anti-tank guided missile.
“Pakistani casualties may be higher. What we have right now is an initial estimate,” the officials said.
The Pakistanis have got it back “right and proper,” said Lieutenant General Vinod Bhatia (retd), a former director general of military operations, commenting on the Indian Army’s retaliatory action.
“Pakistan is seeking to create trouble along the LoC as it is aware of our focus on the LAC and the commitment there. The Pakistan army is making desperate attempts to push in infiltrators before harsh winters set in. The ceasefire violations are carried out to help the infiltrators. Also, the Valley has been quiet and the neighbour wants to up the ante there to trigger violence and bloodshed,” Bhatia added.
In Naugam sector, a BSF officer posted at Atma Complex was killed in the shelling. He was identified as sub inspector Rakesh Dobal. Baramulla resident Abdul Qayoom said that shelling is still going in some areas of Uri. “Four civilians were killed in Uri and another four were injured,” he said.
The ceasefire violation was reported from all the important sectors stretching from Uri to Gurez. All these sectors have witnessed multiple ceasefire violations this year and soldiers have been on high alert.
Locals in Uri said the Indian and Pakistani soldiers were targeting each other’s pickets at Haji Peer and Kamalkote sectors since morning. The locals said small arms and mortars have been used during the shelling which triggered panic among the villagers near the LoC.
“This was one of the deadliest shelling fires in many years in the Uri sector. Some shells hit residential houses,” said Iqbal Ahmad, a resident of Uri. “The people are very scared as we could see shells landing in the villages,” another civilian Mukthair Ahmad Khawaja said.
The situation in Uri town was tense even as ambulances sped towards villages near the LoC to ferry injured civilians to hospitals.
In the Keran and Gurez sectors, mortar shells landed close to residential areas in Izmerg, Baktore and Tarabal localities which are just a few kilometers from the LoC. Two girls were injured in Baktore and both were referred to Srinagar for treatment.
“We were attending an election meeting when shelling began around 11 am. The intensity of shelling was heavy and people ran for cover. The markets were shut and many people took refuge in underground bunkers. Now the shelling has stopped but people are still in underground bunkers, said Zaheer Ahmad, a government official posted in Gurez.
The infiltration attempt in the Keran sector on Friday was the second infiltration bid this week, Kalia said. “Three terrorists were killed in the earlier unsuccessful infiltration bid in the Machil sector on November 7-8,” he added. Three soldiers, including a captain, were killed in action in Machil that day.
At a time when military tensions between India and China in eastern Ladakh, the military is also keeping a strict vigil on the western front to deter Pakistan from fishing in troubled waters and prevent what could turn out to be a two-front conflict. (Courtesy: HT)